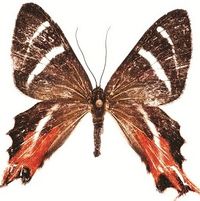 The new endemic species of a flying moth discovered by a Polish expedition in Venezuela has been finally called Erateina puellaastuta (Eng.: clever girl). The name was selected through a competition held by the National Geographic. Ms Alicja Zdobylak from Wrocław is the author of the best proposal.

The flying moth was discovered by Ms Izabela Stachowicz in February 2012 in the vast Guiana Shield, a mountainous region of south-eastern Venezuela and northern Brazil, also known among biogeographers as the Pantepuy. The species was identified by the scientists from the JU Zoological Museum.

"Butterflies make me think both of women and of craftiness. They are difficult to catch and they turn up when it is least expected. I think that the proposed name is beautiful but also mysterious," says the winner of the competition. She will receive a camera and a privilege to be mentioned in the dissertation devoted to the new species as the author of the butterfly's name. Approximately 600 applications meeting formal requirements were submitted for the competition.

"There were many ideas connected with fire, e.g. flamma, ignis, ardens, which alluded to the butterfly's colour.  However, we were looking for a unique name, which would suggest not only the butterfly's image but also the way it was discovered. The cleverness refers both to the butterfly, which was hiding from scientists for so long as well as to me as I managed to find it," says Ms Izabela Stachowicz.

More information about the Tramen Tepui expedition is available HERE.