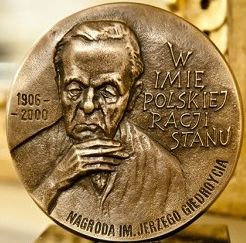 On 12 December at a ceremony in the Royal Castle in Warsaw the names of the winners were announced. The awards went to Prof. Andrzej Nowak, a journalist and sovietologist, and Prof. Timothy Snyder, Yale University, a researcher into Central and Eastern Europe.

"To me, this award has a personal dimension as I happened to know Mr Jerzy Giedroyc. The very fact that I could visit him and that we exchanged and few letters means a lot to me," said Prof. dr hab. Andrzej Nowak.

The President of Poland and the honorary patron of the award, Bronisław Komorowski, commented on Professor Andrzej Nowak's achievements in his congratulatory letter: "Prof Andrzej Nowak has significant scholarly achievements. Critically and creatively does he fit into the spirit of Jerzy Giedroyc's political thinking. In numerous publications he approaches the same problems that Jerzy Giedroyc raised in Culture, Historical Magazines and Cultural Library".

"He  is one of the most eminent historians combining academic work with commitment to the public affairs," said Prof. Marek Kornat in his laudatory speech on Prof Andrzej Nowak.