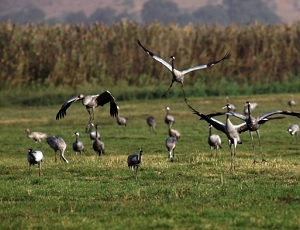 The coming of spring is heralded by longer days, blossoming flowers, as well as the return of migratory birds, which were often joyfully welcomed by our ancestors. Why do Polish birds migrate south? What sacrifices to do they have to make? How do they prepare for a long flight? These questions are addressed in the following article, written with the assistance of Dr Szymon Drobniak from the Jagiellonian University Institute of Environmental Sciences.

1. Why do birds migrate?

Bird migrations are directly linked to the changing of seasons – in winter birds lack enough food, so, in order to survive, so they move to places where it is more abundant. Birds have been migrating for a very long time and this tendency has developed independently in many species, gradually leading to the development of the current migration routes. Multiple periods of the cooling of the climate during the last several million years have been a form of natural selection leading to the survival of the species that could quickly develop the ability to migrate.

2. Why do migratory birds fly in V-formations?

The V-formation allows birds to maximise the aerodynamic efficiency by creating wingtip vortices, reducing the aerodynamic resistance even by 65%. In that way they can increase their flying range by more than a half. Obviously, this does not apply to the bird that leads the formation and doesn’t benefit from the improved aerodynamics. Hence, the leader has to be regularly changed.

3. Do birds always choose the shortest and the easiest route?

Not necessarily. They sometimes choose to follow an indirect route, for instance if they have an opportunity to make a stop in a place suitable for rest. Besides, they often bypass areas with dangerous weather conditions. It is, however, true that they generally follow fixed flight routes. Some minor changes result from the movement of air currents or other unpredictable conditions on the flight route.
For example, storks leaving Poland can cover up to 10 thousand kilometres. During the flight, they look for thermal columns and warm rising air currents. That is why they have to bypass the Mediterranean.

4. How do they know that they are heading in the right direction?

There are several hypotheses regarding this issue, which has been the subject of intense research. Birds possess the sense of magnetoreception, which allows them to perceive direction, but it’s unknown what specific factors determine their flight routes. Simulations have suggested that they are shaped by combination of many different factors, including local geography, the availability of stops, and the predictability of weather on the route.

5. Do they always fly in flocks?

Generally yes, although the flocks differ in size – they consist from several to several thousand birds. One of the reasons for the ‘gregariousness’ of migratory birds is the fact that it makes it easier to seek out warm rising air currents. When one bird finds such a current, it is joined by the rest of the flock. As such currents are much more common in Africa than in Europe, the journey over this continent is much easier for the birds.

6. How many stops do birds have to make during such a long journey?

There are no clear rules, as it largely depends on the weather and birds’ condition. They sometimes don’t stop at all – for instance, arctic terns can fly over 11,000 kilometres form Patagonia to North America without any stops, setting the current record for intermittent bird flight.

7. How do birds ‘feel’ that it’s time to come back to breeding areas?

Birds – like other animals – have a biological clock, which regulates their behaviour, including migration. The work of this clock mainly depends on the so-called photoperiod, that is, the amount of sunlight during the day. The migration is triggered by a combination of factors, inclulding the level of hormones after birth, the current amount of daylight, temperature, as well as the quantity and quality of food.

8. Is the journey exhausting for the birds?

Yes it is. During the migration a bird depletes its energy reserves, and even loses a substantial proportion of its internal organs, as their weight becomes reduced before the journey. Yet, it isn’t a completely exhausting endeavour, as usually birds do their best to be well prepared for this effort.

9. Are there any bird species that come from the north to spend winter in Poland?

Yes there are. The birds migrating to Poland from the north include jays, which replace those that travel further south. As they are omnivorous, they have no problem with surviving the Polish winter. Another examples are rough-legged buzzards, waxwings, or bullfinches from Scandinavia. All these birds spend winter in Poland and then come back north and north-east for the breeding period.

10. What dangers await birds during their migrations?

Migrating birds are vulnerable to many threats. Besides unfavourable whether they may face attacks by predators, shortages of food available on the route, as well as a number of human-related threats, including hunting (especially illegal migratory bird hunts, carried out on a mass scale in North-East Africa and the Middle East) and collisions with power lines. Because of these factors, many of the birds don’t survive the journey. Nevertheless, migration has been an evolutionarily successful strategy, as its benefits easily outweigh the costs.