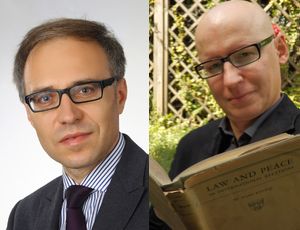 Prof. Roman Kwiecień and Dr hab. Michał Kowalski from the JU Faculty of Law and Administration were appointed for six-year terms as a conciliator and an arbitrator in the Court of Conciliation and Arbitration in Europe of the Organisation for Security and Cooperation in Europe (OSCE). The Polish members of this body will also include Prof. Anna Wyrozumska from the University of Lodz and Prof. Przemysław Saganek from the Polish Academy of Sciences Institute of Law Studies.

The OSCE Court of Conciliation and Arbitration in Europe is mandated to settle, by means of conciliation or arbitration, the disputes between states submitted to it. The court is a non-permanent body and creates conciliation commissions and arbitral tribunals on an ad hoc basis.

Roman Kwiecień is a Law and Philosophy graduate, a professor at the Jagiellonian University Department of International Public Law. He specialises in international law, with special focus on legal position of states, the theory and philosophy of international law, the law of treaties, the use of military force, and the European Union law. Prof. Kwiecień is a member of the Legal Advisory Committee at the Ministry of Foreign Affairs of the Republic of Poland as well as the Permanent Court of Arbitration.

Michał Kowalski is a habilitated doctor of legal sciences, specialising in international public law, a graduate of the JU Faculty of Law and Administration, who has also studied at the Trinity College Dublin. He works at the JU Department of International Public Law and is a member of the Committee on Legal Sciences of the Polish Academy of Sciences  and the Legal Advisory Committee at the Ministry of Foreign Affairs of the Republic of Poland. Dr hab. Kowalski has taught courses in both Polish and English on general international public law, migration and asylum law, diplomatic and consular law, as well as human rights.