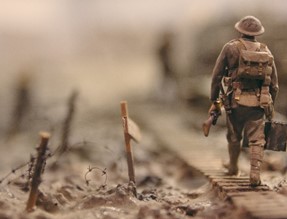 For quite some time, people believed that male-to-female sex ratios at birth increase after outbreaks of war. Some argued that it was caused by a natural drive towards equilibrium: that human societies have a natural way of replacing men they lost in armed conflicts. Are they right? And how would that work? In the article below, Dr Ilona Nenko from the JU MC Institute of Public Health talks about a possible explanation of this phenomenon.

Let’s begin by stating one fundamental thing: being pregnant with a boy is much different than being pregnant with a girl. ‘Male foetuses require a lot more energy. Women pregnant with boys need to ingest more calories to be able to produce highly nutritious milk. What’s more, the interpregnancy interval after giving birth to a boy is observably longer’, explained Dr Nenko. It’s also more of a strain on the woman’s immune system. This is because the Y chromosome, present only in males, produces proteins that are foreign to the female body. How does this information relate to sex ratios in wartime?

Is there a relationship between the environmental and physiological factors that affect the mother and the sex of her child? When there’s a war or natural disaster (like a volcano eruption or an earthquake) that could significantly impact the life of a future mother, it’s more probable that she will give birth to a girl. What’s the basis of this bold assumption? Firstly, because of the Y chromosome we mentioned, male foetus may be treated by the mother’s body as an ‘interloper’, which leads to a greater chance of miscarriage. Secondly, increased psychological distress caused by life-threatening conditions disrupts the hormonal balance of women and increases their energy expenditure, making them less likely to become pregnant with boys.

Additionally, stressful events may affect fathers by reducing the mobility of sperm that contain the Y chromosome and thereby decreasing the number of male foetuses. That fact, coupled with harsh conditions and severely limited access to nutritious food often caused by catastrophic events, lowers both the chance of successful insemination and foetus development. These are the key factors that lead to the disproportion between boy and girl births after wars.

A return to normalcy?

So how do we explain this seeming ‘surge’ of boys that comes after a war? The reality is that the decrease in male offspring that occurs during disastrous events returns to normal when they are over. However, because many more girls than boys are born during troubled periods, it appears as though there is an increase in women giving birth to boys. Therefore, the phenomenon can be confirmed by science: environmental and social factors influence the sex of children.