Star Wars through the eyes of a physicist 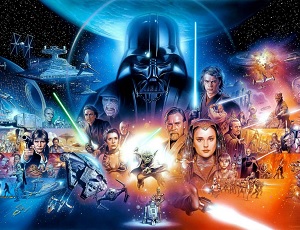 Star Wars is a cinematographic, artistic, technological and sociological phenomenon. George Lucas’ saga has millions of fans all over the world, whose total number is hard to estimate. Their community also includes physicists who approach the films from a more scientific point of view. Selected aspects of Star Wars have been analysed by Dr Witold Zawadzki, a physicist from the Faculty of Physics, Astronomy and Applied Computer Science of the Jagiellonian University.

“A long time ago in a galaxy far, far away...” – this famous opening line first appeared on the screen in 1977 during the premiere of Star Wars: Episode IV – A New Hope, directed by George Lucas. The movie is set in a broadly understood outer space, which corresponded to the fascination with space travel and exploration, typical of the age of Apollo programme, Skylab, Space Transportation System etc., whereas the political and military themes resonated with the generation that grew up during the Cold War. On the other hand, the plot of the film is centred around the classic motif of the fight between good and evil, which makes it universal and easily understood by people of different ages and cultural backgrounds. How does physics, and the universal laws of nature fit into this picture?

“May the force be with you”

The main characters of the saga are sensitive to the Force, which can be described as a sort of mystical bond linking all living beings in the universe. The Force, according to the Star Wars canon, is a kind of energetic field that can be used, for instance, to move objects with the power of mind. For example, in one of the

Influencing physical matter with the power of mind is called psychokinesis. The existence of such a  phenomenon is empirically unproven and hence unrecognised by science. The supernatural abilities of members of the Jedi Order must obviously be considered a product of filmmakers’ imagination. On the other hand, remote interactions between physical objects, such as gravity, electromagnetism or electrostatics, definitely exist in the real world and have been long studied by physicists. According to the law of universal gravitation, all bodies, even very distant from each other, interact thanks to the force of gravity. Similarly, electrically charged particles have an impact on one another. The concept of field is used to describe such interactions.

“An elegant weapon for a more civilized age”

Jedi Knights traditionally wielded lightsabers. Their about 3 feet-long energy blades were capable of cutting through most materials known in the galaxy. The making of their own lightsaber constituted an integral part of the training of a Jedi. The weapon is sometimes referred to as a laser sword, which suggests that its blade is made of a laser beam.

However, this would be impossible for at least two major reasons. Firstly, a laser beam has no end unless it is obstructed by a material object. Secondly, unlike laser beams, lightsabers block each other if crossed, exactly like ordinary metal swords.

In the Star Wars canon, it’s assumed that the lightsabers’ blades were made of plasma. This state of matter is known to scientists, and has obviously been extensively studied. But, as of yet, no-one has managed to make a lightsaber. The technical problem consists both in producing a stable plasma and keeping it in the shape known from the movie. It’s worth noting that cutting a living body with a lightsaber blade doesn’t cause bleeding, which is scientifically correct – because of the phenomenon known as coagulation, high temperature results in the “welding” of tissue and sealing of blood vessels. Laser scalpels using a similar mechanism are widely used in surgery.

“It’s a period of civil war”

Death Stars are the weapons of mass destruction built by the Galactic Empire. They are military space stations equipped with cannons capable of destroying entire planets, or even planetary systems. Physicists ask themselves the question: how could they do it? The green ray fired by a Death Star resembles the beam projected by a laser pointer, which suggests that the weapon uses visible light to destroy its targets. This is confirmed by the canon of the saga, in which the main armament of the Death Star consisted of a super-laser combining eight laser beams powered by Kyber crystals.

If the film was consistent with the laws of physics, the light rays produced by the Death Star wouldn’t be visible from the side, due to the vacuum in outer space, which makes dispersion of light impossible. The visibility of beams can be explained, for instance, by immense power of the produced light, which would be dispersed even by the trace amounts of matter present in the vacuum. On the other hand, it’s very hard to imagine how such a powerful cannon could be powered. It can be estimated that to destroy an Earth-sized planet, it would be necessary to produce the power of at least 200,000,000,000,000,000,000,000,000,000,000 joules (2·1032 J). As the Sun emits electromagnetic radiation of "only" 3.8·1026 J, solar batteries would need six days to charge the Death Star, provided that they would completely surround the entire sun. With solar panels of a realistic size, charging the solar panels would take several dozen years. So how could the Empire obtain such an amount of power? In Star Wars: Episode VII – The Force Awakens the new Death Star named “Starkiller” charged its cannon by sucking in the entire matter of a nearby star, which was then transformed into energy. With our current knowledge, it is impossible to imagine how that could be done.

These are only some of the many issues related to Star Wars’ accordance, or, more likely, lack of accordance with the laws of physics. Analysing this space opera, or other science fiction movies, from the scientific point of view can be great fun. That said, it should be remembered that what seems impossible today can some day turn out to be possible, as mankind has only begun to discover the laws of nature.