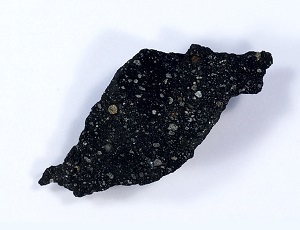 The Jagiellonian University has in its collection a fragment of the Murchison meteorite, which has recently been confirmed to contain the oldest known material on Earth: particles of cosmic dust created before the formation of the Solar System. In the past few days, an international research team published a paper in which they estimate these grains to be about seven billion years old.

Cosmic dust, also called extra-terrestrial dust or space dust, is an important constituent of our galaxy. Not only does it affect the formation of stars, but also influences the chemical and thermal transformations that happen in it. Despite accounting for only a small percentage of interstellar matter, it’s a significant source of particles that are heavier than helium, which are responsible for creation of rocky planets like Earth and are essential in order for life to emerge. What we know about cosmic dust – it’s composition, structure, size etc. – we’ve learned chiefly from spectroscopic imaging, but its particles can sometimes be found in chondrites: stony meteorites composed of materials discovered in the molecular cloud that eventually formed the Sun, commonly thought to be the remnants of the primordial Solar System.

The life of stars

The Milky Way galaxy is composed of stars and interstellar matter in a 9:1 ratio. In turn, 99% of interstellar matter consists of gasses, primarily hydrogen and helium. The remaining 1% is space dust. Such dust and gas clouds are the birthplace of stars and their planetary systems. Every star has its own lifecycle: it’s born when interstellar clouds travelling through space collide with one another, heating up and eventually burning away. The process of burning usually lasts billions of years and is the source of a star’s light.

After a star is done burning, it dies, releasing gas and dust back into space. After millions or even billions of years, these particles eventually form other stars, planets, moons, or even meteoroids: small rocky, icy and/or metallic bodies travelling on a heliocentric orbit. If a meteoroid hits the surface of another celestial body, it becomes a meteorite. One of these meteorites, which fell near Murchison, Australia in the early 1990s, was found to contain some amount of space dust. The most recent study has proved that moissanite (silicon carbide) crystals present in the Murchison meteorite could have been formed as far back as 7 billion years ago. This would mean they could be as much as 3 billion years older than our Solar System, making them the oldest material on Earth.

Universe in a speck of dust

The newfound silicon carbide grains could tell scientists more about how the stars in our galaxy were formed. They were dubbed ‘presolar grains’, and are, in fact, nothing more than the remains of an old star preserved in a meteorite and preserved in an unchanged form for billions of years: a veritable cosmic time capsule.

Is it a simple task to find such matter? Not really. It can be found in as little as 5% of all meteorites that have fallen on Earth. Not only that, but the grains themselves are also extremely small: a hundred of them would easily fit into the full stop at the end of this sentence. 30 years ago, the dust form the Murchison meteorite was isolated in a laboratory at the University of Chicago. A small fragment of the meteorite is stored at the Jagiellonian University Natural Science Education Centre.

To extract cosmic dust from a chondrite, scientists employ a curious method. First, they grind a chunk of a meteorite into powder, forming a kind of paste (which, according to Jennika Greer, one of the researchers, smells like ‘rancid peanut butter’). Next, the paste is dissolved in acid until only the presolar grains remain. On the basis of that, scientists can determine the type of star the grains originated from and their estimated age. In principle, the method is very simple: it’s enough find out how many compounds created by cosmic radiation can be found in the tiny speck. Cosmic radiation is made up of very high energy particles that ‘fly around’ our galaxy, penetrating solid matter. During such interactions, some of these particles react with matter, creating new chemical elements: helium, neon, and lithium. The longer the matter is exposed to cosmic radiation, the more elements it can produce. By measuring the amount of such elements in the grains of dust, it’s possible to determine the length of time during which they were subjected to radiation, and consequently, their age.

But that’s not all. Most of these grains are estimated to be 4.6–4.9 billion years old. Since space dust is created as a result of a star’s death, it can also provide information about its life. It looks like some 7 billion years ago, there occurred a sudden increase in proliferation of new stars. This could provide invaluable input into the debate on the dynamics of star formation (i.e. whether it’s a constant or variable process).

Much more than Murchison

The Jagiellonian University is also home to Allende, one of the oldest known meteorites (estimated at 4.567 billion years), and Elbogen, counted amongst the earliest recorded ones (it fell about six hundred years ago in what is now known as Loket, Czech Republic).

The Jagiellonian University collection also features 23 meteorites that fell in Poland, though the full list might be much longer. It comprises a number of fragments of meteorites such as Pułtusk, Łowicz, Morasko, and Seeläsgen as well as a chunk of a unique meteorite Zakłodzie found in 1996, which doesn’t match any classified meteorite groups.

All of the abovementioned meteorites are part of the permanent exhibition at the Jagiellonian University Natural Sciences Education Centre.