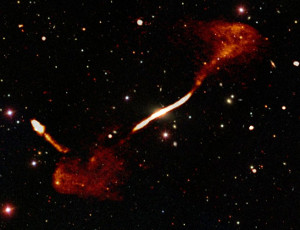 A new scientific project entitled LOFAR Radio Galaxy Zoo gives every Internet user an exciting opportunity to participate in the exploration of the universe and join up with others in order to find supermassive black holes in the centres of galaxies.

What are the origins of mysterious radio objects spanning hundreds of thousands or even millions of light years? To find a definitive answer to this mind-boggling question, scientists from all around the world have made amateurs astronomers an offer: locate several hundred thousands of active galaxies discovered by the largest radio telescope in the world, LOFAR.

To map the sky, astronomers use powerful radio telescopes in a manner similar to conventional ones, such as the Hubble Space Telescope that photographs stars and entire galaxies. However, the images produced by radio telescopes provide a very different picture: stars and galaxies aren’t directly visible, rather, the pictures show complex structures linked with supermassive black holes.

Supermassive black holes absorb most of the surrounding gas and dust, but some of it might end up ejected into space at extreme speeds. Charged particles of this matter, travelling in a weak magnetic field, create vast structures that we can observe thanks to radio telescopes.

The LOFAR (LOw Frequency ARray) telescope, managed by the Dutch Institute for Radio Astronomy (ASTRON), performs a detailed scan of the sky. Some of the structures it detected are so complex that it’s difficult to ascertain which supermassive black hole is responsible for them. The international LOFAR team comprising more than 200 astronomers from 18 countries is facing a real challenge: assigning hitherto unknown radio objects to a correct galaxy.

‘Thanks to LOFAR, we’ve discovered a number of objects on the northern hemisphere. We’re offering a unique opportunity for all astronomy aficionados: help us explore space! For our project LOFAR Radio Galaxy Zoo, we need volunteers that would aid us in learning more about supermassive black holes and the structures they generate’, said Marek Jamrozy from the Jagiellonian University Astronomical Observatory. ‘Each volunteer will be given the task of reviewing the images provided by LOFAR as well as optical maps and, at a later stage, assigning the sources of radiation to specific galaxies’, he added.

‘We’re asking for help on behalf of professional astronomers in finding and describing the sources of radiation to understand the mechanisms governing black holes and the ascertain the amount of mass and energy they can eject into space at great distances’, said Huub Rottgering and Tim Shimwell from the Leiden University in a joint statement.

Become a discoverer of black holes! By joining the LOFAR Radio Galaxy Zoo project, you can take part in an exciting adventure and help astronomers explore space!

Radio Galaxy Zoo: LOFAR is part of Zooniverse, the largest and most popular research platform that engages society. Studies are conducted with the help of volunteers. More than a million of them from around the world work in concert to assist in research projects.