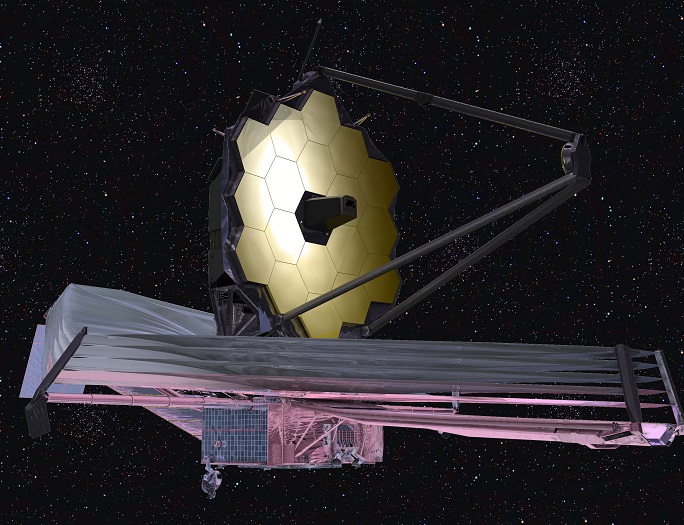 We can be almost certain: it’s a success. In January 2022, the James Webb Space Telescope has completed all the main stages of its deployment in space after its launch in December 2021. It lasted for a few weeks, but it’s nothing compared to nearly 26 years of designing, construction and testing which preceded it.

The idea of sending an upgraded successor of the famous Hubble Telescope was first conceived in 1996. The decades-long project was supervised by NASA and ESA in collaboration with the Canadian Space Agency. NASA itself provided almost ten billion dollars for the project. ESA was responsible for building the Ariane 5 shuttle as well as two important pieces of equipment, together valued at 700 million euro. This means that the James Webb Space Telescope (JWST for short) is one of the most expensive scientific devices in human history, comparable only to the aforementioned Hubble Telescope and CERN’s Large Hadron Collider.

JWST is also the largest orbital observatory built by man – or, to be precise, by about 10,000 people from around the world, with more than 1,200 scientists, engineers and technicians from NASA alone. The ambition of the project shows even in its estimated duration, as according to the plan, the telescope will be scanning space for the next 10 years, and even that time might be lengthened by as much as 50% thanks to efficient use of fuel during launch, as the shuttle’s trajectory was so precise that no serious course correction was needed.

In the past, JWST has had some problems with funding: its launch has been delayed numerous times. First, it was planned for 2014, after that, 2018. Because of a series of technical difficulties, it was postponed further and further, until in 2021 it seemed that a successful launch is the last challenge to overcome for the JWST team.

But nothing could be further from the truth. Launching the telescope was one thing, but it still needed to successfully complete 344 (!) stages  of deployment and calibration, not to mention reaching the desired orbit. Naturally, it must’ve been a stressful time for mission control, although thankfully it’s almost over, with most procedures concluded without any significant errors. It could be said that the telescope was built on Earth, then dismantled and reassembled again in space. This was done for practical reasons, as, for instance, the telescope’s mirror is far too large to be launched into space without first disassembling it. It is composed of eighteen 1.3 metre hexagonal elements arranged in a honeycomb structure, which covers an area of more than 25 square metres.

Some of the stages of the telescope’s deployment included unfolding of thermal shields and arranging the elements of the mirror, which had to be fitted to one another with an astonishing accuracy of up to 10 nanometres. Individual engines controlling each of the parts of the mirror seem to be working properly. However, there are still some critical part of the deployment plan that need to be carried out perfectly if the telescope is to become an invaluable tool for science, such as activating numerous on-board instruments.

Additionally, JWST needs to reach the L2 Lagrange point in the Sun-Earth system. There, it will circle around the Sun 1.5 million kilometres from Earth. In every system of two masses revolving around each other, there are five specific points named after their discoverer, Joseph-Louis Lagrange. Two of them, L4 and L5, are what is called stable Lagrange points. If an object of a much lower mass, such as a telescope, reaches one of them, it will be able to maintain more or less constant position in relation to both the Sun and Earth. The rest of them, L1, L2 and L3, are unstable Lagrange points, in which the position of an object in relation to the Sun and Earth will only be partially constant. JWST is going to be circling around L2 on a relatively wide orbit. It will be necessary to perform certain manoeuvres in order to maintain it.

But why send JWST all the way to L2? When astronomers made that decision, they needed to take into account several factors. For instance, the telescope will be scanning the Universe in infrared, the part of the light spectrum which we usually call thermal radiation. If we want such an instrument to be able to detect faraway low-visibility objects, we need to cool it down as much as possible. Thermal shields will protect JWST both from the Sun and the warmth emitted by Earth, but it needs to be located on an orbit that will place it at a specific position in relation to those celestial objects. An added benefit is that, having the Sun and Earth always in the same part of the sky, the telescope will have an unobstructed view of the cosmos. In comparison, the Hubble Telescope is circling Earth on a low orbit, meaning that every 90 minutes it comes in and out of our planet’s shadow, which restricts its field of view.

It’s precisely the location that is the one of the biggest differences between the two telescopes. However, there is a downside, as it would be more difficult to carry out a rescue mission, such as the one that was required for the Hubble Telescope in 1993.

The two telescopes might have more differences than similarities, though, and it’s not just their orbits. Naturally, both of them are very expensive space telescopes, but they are based on different technologies and designs. The Hubble Telescope registers visible light, ultraviolet and near-infrared. The James Webb Space Telescope will only produce infrared images, which is a challenging task. This range of electromagnetic spectrum requires not only a different design, but also special measures of protection against solar radiation.

Although cosmic infrared background radiation is very difficult to observe, scientists think that JWST will more than pay for itself in the context of research, similarly to its predecessor. JWST will open a new, exciting chapter in the history of astronomy, as thanks to its sophisticated equipment it will allow us to learn much more about the Universe and its most distant galaxies and stars that emerged as little as 400 million years after the Big Bang (it’s currently estimated that the Universe is 13.8 billion years old).

There are some people who devoted more than a dozen years of their careers to working on JWST, and a whole new generation of scientists has emerged during its construction. It is they who now have a chance of making new discoveries. Thanks to JWST, they will be able to not only study faraway galaxies with previously unachievable precision, but also gain much more information on extrasolar planets. We already know of about 5,000 planets revolving around stars other than the Sun. Could JWST make it possible for us to find planets similar to Earth? So far it remains to be seen, but scientists are sure that the telescope will lead us to breakthrough discoveries, many of which we’re currently unable to even imagine.

‘James Webb Space Telescope will change the way we perceive the Universe’, said Jean-Marc Nasr, Executive Vice-President of Space Systems at Airbus – and it’s difficult to disagree, considering the impact of the Hubble Telescope. Though the telescope’s recent launch has garnered much attention, it soon became less and less  popular. However, it’s definitely be important to follow the mission and the discoveries it leads to. The first batch of data will be available in 5 months.