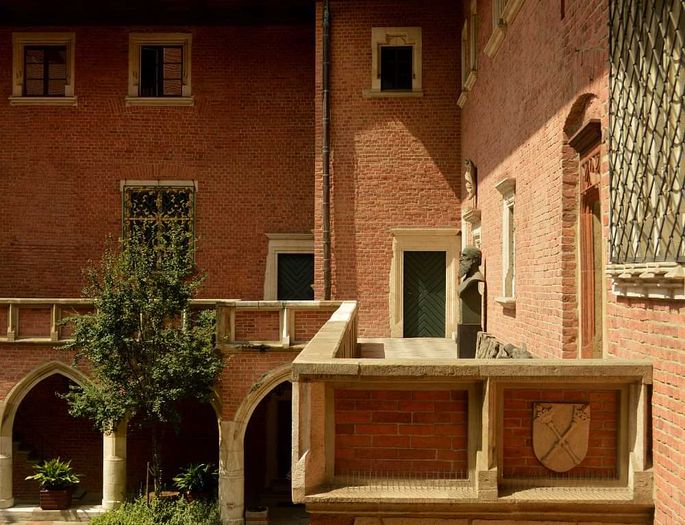 To purchase a ticket, you need to register at the website www.bilety.uj.edu.pl. Having such an account allows users to browse their purchase history and manage their data. The payment operator for the site is Blue Media SA. Purchases can be made with credit card (Visa, MasterCard), BLIK or bank transfer.

The Museum represents the rich and very diverse heritage of the University. Over more than 600 years of its existence, the University has accumulated objects related to virtually every field of science and education.

Visitors coming to Collegium Maius can see the Libraria, formerly the university library, which features reconstructed instruments of the type once used by Nicholas Copernicus and busts of personages associated with the University. The following room is the Stuba Communis, the historical dining and assembly room used by scholars in the past. Both treasure rooms house the most valuable objects linked with the history of the University (sceptres, rector rings, copies of the foundation charters), but also objects donated to the University, including Andrzej Wajda’s Oscar award or the Literature Nobel Prize medal won by Wisława Szymborska. The professor’s quarters bring back the memory of the scholars who once lived in the building. Their interiors feature a collection of 18th and 19th-century furnishings.

In the second part of the Museum, you can visit rooms featuring exhibits related to different fields of science such as chemistry, physics, cartography, mathematics or geodesy, but also a collection of medieval sculptures or Chopin's piano.

There is also a place in the Museum related to St. John of Kęty, namely a chapel dedicated to him. It is located in the place where, according to the academic tradition, Kanty was supposed to live as a professor of theology.

Also worth mentioning is the clock located above the entrance to the Libraria. Every two hours, from 9 a.m. to 5 p.m., it plays a melody which is an excerpt from an organ tablature by Jan of Lublin (Renaissance music) and the academic song Gaudeamus Igitur. The melody is accompanied by a procession of figures representing people associated with the University: the beadle, Queen Jadwiga, King Jagiello, St. Jan of Kęty, Hugo Kołłątaj, and Rector Stanisław of Skalbimierz.

The Botanical Garden of the Jagiellonian University was founded in 1783 and is the oldest existing botanical garden in Poland. It stretches on almost 10 hectares at the foot of a 17th-century palace. Its establishment was initiated by Hugon Kołłątaj during the reform of the Cracow Academy. Since 1792 there has been an Astronomical Observatory and a Meteorological Station at the Śniadecki College, which has been continuously recording the weather since 1825.

The collection of the Garden comprises about 8 thousand species and varieties of plants grouped in several sections. The most important sections include plant systematics, protected and endangered plants, genetics and variability, Polish flora, floral ecology, morphological-biological, medicinal and useful plants, an arboretum and alpinaria: geographical and ornamental. Among the extremely valuable is also the collection of tropical plants gathered in three greenhouse complexes: Victoria, Jubilee and Holenderka. Visitors can admire one of the richest Polish collections of orchids, cycadales, palms, carnivorous plants, epiphytes, succulents and tropical utility plants.

The Botanical Garden Museum is also a part of the Garden, where one can get acquainted with an exposition presenting the history of the Garden, famous botanists connected with this place, and extraordinary exhibits from research conducted by Cracow botanists from the equatorial rainforest to the Arctic and Antarctic tundra zones. The Garden owes its present arrangement to Władysław Szafer, one of the most eminent Polish botanists.

The Nature Education Centre is an entity within the Jagiellonian University that assembles natural history collections. The beginnings of the collection date back to 1782 and are associated with the establishment of the Natural History Cabinet at 6 Św. Anny St. Over the following 240 years the fate of the collection was closely linked to the history of the Cracow University - during the partitions of Poland it was intensively developed, during the Second World War it was used in secret teaching, and in the 1960s it was moved from the Old Town to the newly constructed buildings of the Jagiellonian University's Second Campus near the Błonia Meadow Park. At the beginning of the 21st century, an idea was born to create a modern university unit which would be a return to the original idea of the Natural History Cabinet, where the dispersed collections could be reunited and taken care of as a part of the University's heritage. The result of these activities is the creation of the Centre for Natural History Education in the complex of the Jagiellonian University Third Campus.

The backbone of the Centre's educational activity is the scientific collections, comprising over half a million specimens - the effect of work, passion and inquiries of many generations of researchers, the legacy being the foundation of reliable and well-established education. This in turn can be realised on the basis of the main exhibition entitled Evolution of the Earth and Life, which presents over 7,000 exhibits in thematic blocks devoted to the issues of animal systematics, biogeography, evolutionism, ethology, anthropology, palaeobiology, mineralogy, dynamic geology and sedimentology, as well as periodical thematic exhibitions. The permanent part of the exposition also includes an astronomical section and a reconstructed 19th-century natural history cabinet. The exhibition made available to visitors is based on original and often unique specimens, models and dioramas presenting reconstructions of modern and fossil ecosystems.