JU visited by the Ambassador of Japan to Poland 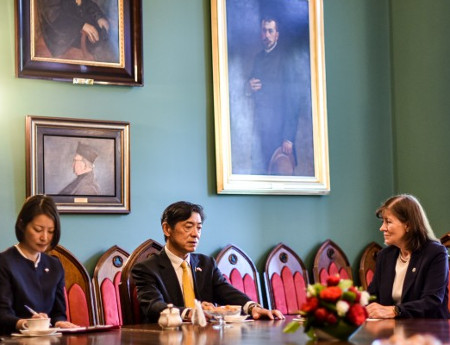 On June 13, the JU Vice-Rector for International Relations Prof. Dorota Malec received the Ambassador of Japan to Poland Miyajima Akio, who was accompanied by Makino Michiko, Director of the Department of Information and Culture at the Embassy.

The meeting was also attended by the Dean of the JU Faculty of Philology Prof. Władysław Witalisz, the head of JU Department of Japanese and Chinese Studies Prof. Stanisław Meyer, and Adriana Hołub Palonka from the JU International Relations Office. The participants discussed issues related to the collaboration of the Jagiellonian University with Japanese partner institutions as well as the situation in Ukraine, including the JU’s efforts to help the war victims and refugees. After the meeting the Ambassador went to JU Collegium Paderevianum, where he delivered the lecture entitled Today’s World and Japan-Poland relations.

Prof. Dorota Malec stressed that the Jagiellonian University considers Japanese higher education institutions very important partners, and the international cooperation is not limited to the JU Institute of the Middle and Far East, but also involves other JU Faculties. One of its cornerstones is the Ryoichi Sasakawa Young Leaders Fellowship Fund (SYLFF), established in 1987. The Vice-Rector invited the Ambassador to the celebrations marking the 30th anniversary of the launching the SYLFF programme at the JU, planned for 2023.