A Polish-Ukrainian research project will be carried out by JU’s Prof. Maciej Pabijan 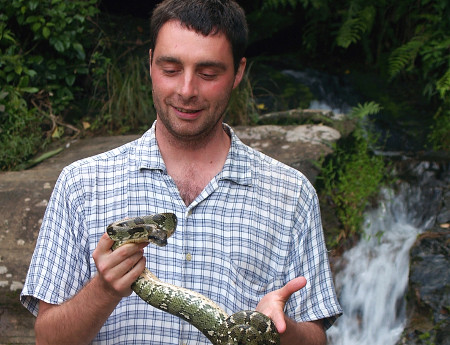 Coevolution of the mitochondrial and nuclear genomes in species subject to hybridization is the title of the project awarded by the Polish National Agency for Academic Exchange (NAWA) with funding for 2023-2024 as part of joint research projects conducted between Poland and Ukraine.

The purpose of NAWA's joint research projects is to support the mobility of scientists implementing research projects conceived and conducted jointly by applicants from Poland and partners from other countries.

The list of the recently resolved call for joint Polish-Ukrainian research projects includes one which will be realised at the Jagiellonian University. Ir will bo co-coordinated by Dr hab. Maciej Pabijan, Prof. UJ from the Henryk Hoyer Department of Comparative Anatomy of the JU Faculty of Biology.

The project aims to sequence mtDNA and nDNA genes whose products are involved in mitochondrial metabolism in four groups of vertebrates forming hybrid zones in eastern Ukraine.

The result of the project will be a quantitative estimation of the impact of cytonuclear incompatibilities on reproductive isolation between species, as well as an attempt to clarify issues related to extensive mtDNA introgression. The work will include the collection of research material in eastern Ukraine, requiring joint trips of the Ukrainian and Polish parties. Laboratory analyses (obtaining transcriptomes, mtDNA and nDNA gene sequencing), as well as bioinformatics analyses will be conducted at the Institute of Zoology and Biomedical Research of the Jagiellonian University, under the supervision of Polish researchers, but with participation of Ukrainian scientists. The cooperation will result in joint publications in the field of speciation genetics.