Exhibition to mark the 80th anniversary of Sonderaktion Krakau 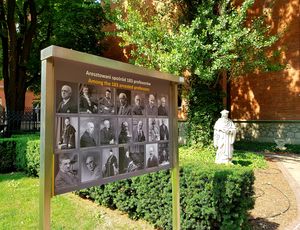 The board exhibition presented in the Professors’ Garden shows the fate of the Jagiellonian University professors during the World War II from the moment of their arrest in Kraków to their release or death in German concentration camps. The text on the boards is accompanied by photographs of the professors, graphics, paintings, and mementos of some of the prisoners. The display commemorates the time of brutal destruction of the Polish academia and culture pays tribute to its victims.

On 6 November 1939 the Nazi German authorities carried out the operation known as Sonderaktion Krakau, arresting 183 professors of the Jagiellonian University, the Academy of Mining, and Trade Academy, who gathered in Collegium Novum building. The detainees were first taken to prison at Montelupich street and then deported to Sachsenhausen-Oranienburg concentration camp. As a result of illness, hunger, beatings and persecution, 20 professors lost their lives in the concentration camp or shortly after the release. The conduct of the prisoners, who preserved dignity and humanity under extremely harsh conditions, has inspired widespread respect and admiration, especially from the academic community.

The exhibition organised by the Jagiellonian University Musem is presented in both Polish and English language version. It can be viewed during the Professors’ Garden opening hours. The admission is free.