The Catholic Reformation and the Book - call for papers 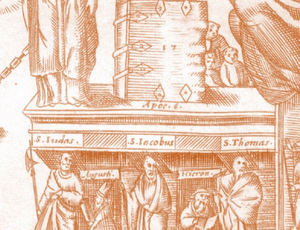 This two-day online conference invites scholars to examine the interactions and mutual influences between the Catholic Reformation and the printed book.

Histories of printing and religious controversy in early modern Europe usually focus on the powerful impetus supplied by the development of print to the spread of Protestant movements. In contrast, book production that set out to promote Roman Catholic ideas and values has not attracted the same degree of scholarly interest, despite the fact that the Catholic Reformation counts among the most powerful of the factors that shaped not only the religious and political but also the cultural history of Europe after the Council of Trent.

The defenders of the old ways were well aware of the far-reaching consequences, both potentially beneficial and detrimental, of the invention of the printing press for their cause. This consciousness gave rise to many and varied solutions: from the Index librorum prohibitorum, through the reform of liturgical books, to the systematic provision of cheap devotional reading matter in the vernacular. The aim of the conference is to stimulate discussion on the uses of the printed book by Roman Catholics and the role of this medium in the consolidation of opposition to the message of the Protestant Reformation and in the implementation of Tridentine reforms. We hope to bring together book historians, archivists, literary scholars, and librarians to explore how the Catholic Reformation used printed matter as a vehicle for ideas, and what influences the movement exerted on European book markets and book cultures. Both case studies and more general overviews are welcomed. Possible topics include, but are not limited to:

The organisers hope to publish a peer-reviewed volume based on the conference contributions in the series The Library of the Written Word by Brill. The language of the conference will be English. Paper proposals (paper title, an abstract of max. 300 words and a short bibliographical note) should be sent to Justyna Kiliańczyk-Zięba (justyna.kilianczyk-zieba@uj.edu.pl) and Magdalena Komorowska. (magdalena.komorowska@uj.edu.pl) by 1 May 2021.
Find us at
Facebook Twitter Youtube Flickr Instagram LinkedIn VK
BIP RSS