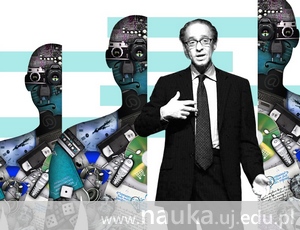 Ray Kurzweil, an influential futurist, the man who correctly predicted the advent of wireless Internet access, has prophesised a new, revolutionary vision of the future: from 2045 and onwards, people will be able to live forever. This can’t be true, can it? Does Kurzweil have any compelling arguments to support his claim?

To fully comprehend why Kurzweil heralds so quick a transition from the present to the future we know only from sci-fi films, we must first understand the concept of singularity. Indeed, it is singularity that we’re pushed towards by the great bulldozer of technological development.

One of the first scientists to ever talk about singularity was a famous Polish mathematician by the name of Stanisław Ulam, a student of Stefan Banach and a PhD at the Lviv Polytechnic National University. In the 1950s, he mentioned his past conversation with another renowned mathematician, John von Neumann, about ‘a certain point in the history of mankind when everyday life as we know it would no longer be possible’.

According to the most prevalent definition, the singularity is a certain point in the future when the technological development will become so fast that it will be impossible to accurately predict what happens afterwards. In other words, artificial intelligence, semi-automatic or even self-operating systems (systems controlling production, managing our health, houses, social communication, and who knows what else) and self-organising devices (like learning robots) will constantly provide new solutions and reshape our environment. Imagine going to sleep one day and waking up the next one only to realise that your trusty old Volkswagen has been replaced with a futuristic streamlined car. Terrifying? Amazing? Hopeful?

Based on our knowledge of science and reality, Kurzweil claims that we can more or less foresee when the singularity is going to happen. He believes this day will come in the year 2045. What’s more, the singularity will not only mark the beginning of completely unpredictable changes, but also the moment when our biological brains will become united with digital ones, existing somewhere outside of our bodies, inside servers and networks. This closely interrelated biotechnological brain (and the development of medicine) will allow people to live forever.

In an interview for Playboy, Kurzweil states that even now we’re constantly, if unconsciously, becoming more and more fused with technology. Smartphones may not be an integral part of our bodies in the biological sense, but why does that matter? They have become an important element in our lives, they influence the way we think and behave. Naturally, it’s not the device itself that’s so important to us, but rather the fact that it serves as a means to access our data and connect us with other people.

We need to understand that our brains have a limited capacity. They won’t be able to store and process an ever-increasing amount of information. But there’s a solution: connecting the brain to a computer. Even before the 2030s, we’ll be able to create nanobots that will enter our brains through the capillaries and combine our brain (more precisely – the neocortex, the part of our brain responsible for thinking, speaking, and remembering things) with a digital one. This will allow us to wirelessly connect to the Internet cloud and access digital data. This ‘outer brain’ will, in fact, become a part of the network. It will greatly increase our mental capabilities by assisting us in selecting and using relevant information.

Though Kurzweil is quite precise in his predictions, he leaves some room for uncertainty. We may expect a certain model of ‘dual-brained humans’ behaviour. We can fantasise about everyday situations in which our ‘dual-brain mega-power’ would be of assistance. The futurist provides the following example. Let’s say you’re walking down the street and you accidentally bump into your boss. You have just a few seconds to react and you want to say something intelligent, interesting or funny (preferably all three). Your expanded mind quickly browses through the vast sea of data and suggests the appropriate words. However, it’s important to remember that our current limitations stemming from our past experiences and history may not prove to be adequate tools to deal with what lies ahead of us. In other words, the technological changes will challenge the way that we think, the way we inherited from our Palaeolithic ancestors. We may simply be ill-equipped to comprehend the changes that transform thinking, expand it and push it out of the biological and cultural boundaries of the present.

And thus we return to the concept of singularity which, again, is a future change that escapes our current understanding. In 2045, our ‘outer’ (non-biological) intelligence will be billions of times more powerful than the human intelligence as we know it today. Many ground-breaking events will precede the singularity. Firstly, a computer will be able to pass the Turing test: a human will fail to discern between man and machine in a conversation (although Kurzweil doesn’t mention it, there are reports that this has, in fact, already happened). Secondly, our knowledge of biomedicine will grow exponentially. We’ll be able to reprogramme our ‘biological software’ – DNA – and eliminate diseases and ageing.

Indeed, Kurzweil regards the role of advances in biotechnology as crucial, especially when it comes to regeneration of tissue and organs as well as targeted therapies. The true breakthrough will come in just a few years with medical nanobots supplementing and modifying the work of our immune system. Evolution did not shape our bodies with longevity in mind. For millions of years, longevity was not a priority for the biology of organisms, as it was more adapted to short periods of time: birth, maturity, reproduction, nurturing offspring, and death.

Nanobots will also assist our T cells in combating infection and cancer. The new artificially intelligent T cells will be programmed to eliminate all pathogens, and their ‘drivers’ will be easily updated via the Internet. After 2030, these ‘electronic cells’ will have so much of an impact on our bodies that we’ll be able to stop, and even reverse the process of ageing. ‘I believe we will reach a point around 2029 when medical technologies will add one additional year every year to your life expectancy’, Kurzweil said. ‘That’s a lot of Friends re-runs. Won’t we get bored?’, joked the interviewer David Hochman.

The cure for the monotony of longevity will be the expansion of life aided by our second, networked brain. People will create and explore new, imaginary worlds. They’ll also change themselves, if only to satisfy their sexual partner, so that the normal, human appearance will become just one of many options in the sexual relations of the future. Generally speaking, our understanding of ‘normal’ will gradually broaden. In fact, it’s already happening, as we can see by the growing popularity of tattoos, piercings, and plastic surgery. In the near future, changes in appearance will happen at an increased rate, based on the needs, trends, and individual preferences.

So we’ll be more funny. What about wars and famine?

The matter-of-fact predictions of Ray Kurzweil seem unequivocally optimistic. It may appear that the American futurist is living in a bubble, completely out of touch with reality. Therefore, important questions must be asked. What about the security of our ‘outer brain’, which will download massive amounts of data from the Internet? How is it that we’ll be able to produce enough energy to sustain our brains? If we fail to connect with our ‘outer brain’ for some reason, are we going to get an error message like ‘Your mind is unavailable due to technical reasons. Our programmers are currently working on a fix’?

What about the dark side of new technology? What about the world that, in spite of vast technological advancement, is still full of wars, famine, crime, unemployment, inequality, and diseases? And let’s not forget that technology itself comes with its own set of dangers: nomophobia (fear of not being able to use smartphones and computers), video game and Internet shopping addiction, rampant growth of paedophilia, pornography, and fraud. Technologically advanced cars still get into accidents, and the Internet is full of guides on how to build a bomb or how to join ISIS.

The wisdom obtained through the communion between our biological and digital brains is understood by Kurzweil not in the context of choosing a way of life, but rather using an increased amount of information to live a better (?) life. ‘We’ll create more profound forms of communication than we’re familiar with today, more profound music and funnier jokes. We’ll be funnier. We’ll be sexier.’ But is that enough?

Such doubts are inevitable whenever a technological leap happens. This held true for the 19th century Industrial Revolution, development of cars, and public access to TV, VCRs and PCs. Subsequent technologies aim to eliminate the disadvantages of their predecessors, like the self-driving car designed to increase safety on the roads by eliminating the human factor. ‘Humans’ said Kurzweil, ‘are indeed very bad drivers’.

Kurzweil’s answer to the arguments about the discrepancy between his optimistic view of the future and the grim vision of ‘a sick world’ is simple. He stated that we ourselves are not aware of the fact that we’re living in the time of greatest prosperity in human history. ‘Your chance of being killed hundreds of years ago was far greater than it is today because there was extreme scarcity of resources hundreds of years ago’, he said. The world we live in, however, lets us see more evil than ever before. Every smartphone has a build-in camera, and showing cruel acts to a large audience has never been easier (for instance, just look at the first episode of Black Mirror).

All this is true, although Kurzweil’s arguments seem to relate mostly to New Yorkers or inhabitants of some other huge and prosperous metropolis. What about Darfur? What about the Ebola virus in Africa and the Mexican cartels? Even if the average quality of life in the world is now better for everyone, it doesn’t convince millions of Syrians to remain in their war-torn country.

Raymond Kurzweil (b. 12 February 1948 in New York) – computer scientist, inventor, futurist, author, designer of a musical synthesiser, pioneer in optical text recognition technologies. In February 2009, Kurzweil, in collaboration with Google and the NASA Ames Research Center in Mountain View, California, announced the creation of the Singularity University training centre for corporate executives and government officials. In 2011, he was ranked as the 30th most influential person by Time magazine. He works for Google, developing artificially intelligent machines, e.g. ones that are able to have a conversation with humans.