Joke morality. Is it OK to laugh at offensive jokes? 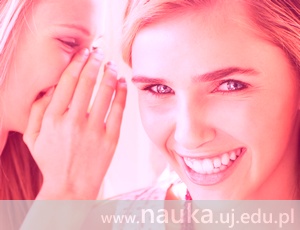 Many people laugh at offensive jokes based on negative stereotypes of certain groups, such as miserly Jews, lazy blacks, or thieving Poles. Others, however, think that such jokes are in bad taste, crude, and even detrimental to society. Could they be right? Can a particular type of humour be unacceptable from a moral point of view? We asked Maciej Juzaszek, a PhD student at the JU Institute of Philosophy and Chair in the Theory of Law, to provide us with an ethics-oriented answer.

In one of his most popular pieces, American stand-up comedian Louis C.K. jokes about children dying from nut allergy. The most popular version of this joke on YouTube already has over one million views and 11,000 likes (and just 200 dislikes). In 2017, Louis C.K. was voted the 4th best stand-up comedian of all time by Rolling Stone. Despite this fact, a lot of people surely ask themselves: ‘What’s so funny about dying children?’ and ‘What kind of person would joke about that?’. It’s unsurprising; after all, jokes and pranks are often morally controversial.

Does our worldview affect our sense of humour?

South African philosopher David Benatar has distinguished several categories of jokes that cause serious moral controversy. They are: 1) jokes based on prejudice – racism, xenophobia, homophobia, and sexism, such as ‘Polish jokes’; 2) blasphemous jokes, such as ones making fun of religion and priests; 3) scatological or sexual humour, i.e. jokes about human excrement or sexual deviations; 4) dark humour – jokes about death or tragedy, such as the Holocaust or famine in Africa; 5) jokes about physical or mental disabilities, like Down’s syndrome; 6) humour concerning misled or confused people, such as hidden camera pranks. This is by no means a closed list.

As Benatar points out, moral criticism of jokes can have two different faces. We can either assume that something’s morally wrong about the person telling the joke, or that the moral flaw lies solely in the joke itself. Both types can be further divided to context-independent and context-dependent. In the first case, a joke will be morally unacceptable in any circumstances, while in the second one it may sometimes be acceptable based on place, audience, or timing.

Ronald De Sousa claims that no joke will be funny to us unless we accept its presuppositions. In other words, the joke’s ability to make us laugh is based on the acceptance of the worldview it communicates. Therefore – De Sousa reasons – if someone laughs at sexist jokes, they’re not only aware of the negative stereotypes, but also agree with them, for which they should be justly condemned. According to De Sousa, if we didn’t feel prejudiced towards, for instance, blonde women, we wouldn’t laugh at jokes about them. And that’s irrespective of any context we might hear them in.

Who can laugh at people of colour?

One may object to this line of reasoning by stating that finding a joke funny isn’t always indicative of accepting its presuppositions. Naturally, anti-Semitic jokes will be hilarious to people prejudiced against Jews, but will they be funny exclusively to such people? De Sousa’s opponents argue that understanding a joke and laughing at it does not require accepting its presupposed prejudices or stereotypes. On the one hand, simply knowing that the stereotypes presented in the joke are found in the society is usually enough. So if someone tells us: ‘Do you know why policemen always go on patrol in pairs? Because one of them can read, and the other can write’, we don’t have to accept the notion that law enforcement officers have a particularly low IQ. This is clearly visible in prejudice-based jokes told by representatives of groups affected by those prejudices. For example, it’s very hard to suspect black stand-up comedian Dave Chapelle of racist anti-black sentiments, but his jokes are very often based on such sentiments and told to an overwhelmingly black audience. Furthermore, when told by people harmed by prejudice, such jokes may serve to ridicule the bigots.

On the other hand, a joke may be funny because of a multitude of various factors independent of its content, such as linguistic contradictions or ambiguity. Let’s take the following joke: ‘Two women are talking about Internet communication. At one moment, the blonde asks: “That does IDK stand for?”. The brunette answers: “I don’t know”, to which the blonde replies: “Oh my God, nobody does!”’. To find this joke funny, we don’t have to believe that blonde-haired women are less intelligent than others – we just need to notice the ambiguity of the brunette’s answer. We could easily substitute the blonde in this joke with anyone else – little Johnny, for instance.

Context-independent moral criticism of a joke is much more problematic from the ethical point of view. Its presupposition is that there are some subjects or people that should never become a target for jokes for anyone. The best example of this are ‘blasphemous jokes’ about deities or sacred places. The criticism is, however, very subjective. In an overwhelming number of cases, things that cannot be joked about are designated by members of certain religious groups – but people who don’t belong to them may not feel like respecting this decision. Such refusal to accept a religion’s commandments has led to tensions when Danish newspaper Jyllands-Posten published several editorial cartoons of the prophet Muhammad, the principal figure of Islam. It’s difficult to find something that’s universally regarded as too sensitive to laugh about. 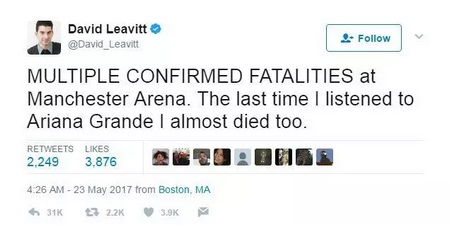 On the other hand, context-dependent criticism is much easier to discuss, since certain jokes are widely frowned upon precisely because of the circumstances in which they’ve been told. Such ill-thought jokes can be proof of carelessness, disrespect, or lack of empathy towards victims of tragic events. The best example of this would be journalist David Leavitt’s tweet published shortly after the terrorist attack that took place during Ariana Grande’s concert in Manchester.

Another morally unsound type of jokes are those told with a wicked intent: a desire to offend a person (or group of people). If someone tells an offensive joke in the presence of a person whom it offends with the express purpose of insulting them, then it’s a morally reprehensible act, regardless of whether that person takes offence or not.

The role of context

A specific context can cause a joke to be perceived as morally reprehensible no matter if it’s a consequence of the moral failings of the person telling it (or laughing at it). This holds true in cases in which feelings, rights, or property of certain groups of people (e.g. ethnic or religious) suffer as a direct consequence of the joke. Although jokes rarely lead to physical harm, it does sometimes happen – one needs only to recall the notorious case of the suicide of Jacintha Saldahna (or the infamous, albeit much less harmful prank pulled on Italian singer Emma Marrone).

It’s much more frequent that jokes lead to different kind of consequences. As pointed out by Aaron Smuts, jokes can cause humiliation, embarrassment, ridicule, ostracism, and damage to reputation, such as in the case of Sophie Stevenson, a victim of a ‘pull a pig’ prank.

Furthermore, jokes can often perpetuate negative stereotypes, behaviours, or prejudices. Jokes that assure us women are only capable of making men sandwiches, or that all Romani people are thieves, can negatively impact the members of these groups – some people may choose to see women as less fit for certain professions, or perceive the Romani as fraudulent employees, making both of them suffer on the job market. Prejudice-based jokes can also lead to more subtle (even unconscious) changes in social behaviour, such as believing men to be responsible for most of the work done in mixed groups or expressing racism in non-verbal communication in TV shows.

As we can see, our sense of humour can be subject to justified moral criticism. However, this criticism is largely dependent on context, since it’s very difficult to find jokes that will invariably prove unacceptable by everyone. Maybe most jokes, even those prejudice-based and disgusting, can be tolerated as long as they’re told in proper company and don’t hurt anyone in the process. Still, in come contexts, jokes can rightfully arouse our moral suspicions, or even outrage.