Can trees eliminate smog in cities? 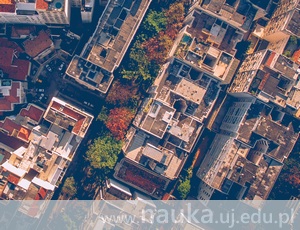 Just like other plants, trees produce oxygen. So technically, the more trees we plant, the more oxygen we’ll get. Is it that simple? Can we get rid of smog in cities by planting a large number of trees? Unfortunately, the answer is not that obvious. We asked Dr Piotr Klepacki from the JU Institute of Botany for an explanation.

1Question is a series of articles by the University Marketing science communication unit, in which specialists and experts from various fields briefly discuss interesting issues related to the world, civilisation, culture, biology, history, and many more.

First of all, we should make one thing clear: plants not only consume carbon dioxide, but also produce it. If they don’t receive a sufficient amount of light, they ‘breathe’ just like us: they draw oxygen from the environment and expend carbon dioxide. When a heliophyte (a particularly ‘sun-loving’ plant) doesn’t get the sunlight it needs, it’ll start to compete with us for oxygen before it eventually withers away.

Plants’ leaves are equipped with stomata which facilitate gas exchange. Although most dust particles accumulate on the surface of the leaf (particularly if the leaf is covered with trichomes, wax, or rough areas), some also find their way inside through these organs. The leaves are like little warehouses, storing dust until it’s either washed away by rain or they fall off in autumn. If the ground is covered with grass, wind won’t be able to pick it up for a while. There are complex methods of estimating how many tons of dust can be ‘absorbed’ by lawns, and although it can be measured in tens of thousands, it’s still usually less than 10% of the entire amount of dust circulating in the cities. That’s far from satisfactory. 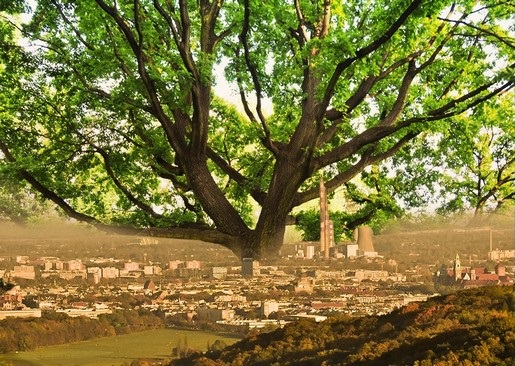 There are more and more papers devoted to potential ways of reducing smog by urban flora, but their conclusions are often contradictory. This is probably caused by differences in local environments: the distance between individual buildings, trees and shrubs in relation to each other as well as the strength and direction of the wind influences the level of pollution. Large, lush, and healthy trees greatly affect local movements of air, be it positively or negatively. For instance, they can limit the ventilation of a busy, narrow street surrounded by tall buildings, thereby increasing air pollution on ground level.

Scientists are not in agreement – some of them suggest that trees should be planted in the areas with the highest pollution so that they could shield people from dust particles by absorbing them, while their opponents point to the problem of obstructing air circulation and advise planting hedges instead.

The role of plants in combating city pollution is not yet well researched. This is partially due to the complexity of the problem. Many analyses are performed on the basis of simulations, but they're often far removed from real life situations. On the other hand, research done on data collected in a concrete location only describes that particular location, offering no general explanations. Interestingly enough, although some scientists believe that trees may negatively impact the quality of air in a certain neighbourhood, nobody disputes the positive influence of green areas on the entire city. Municipal forests, parks, commons and gardens undoubtedly reduce the amount of pollution (although it’s debatable to what extent).

But trees are not merely a remedy for smog. The most important way in which plants impact our health is, in fact, stress reduction. Even looking at foliage has a positive effect, which only increases if we’re surrounded by it, like in a park or meadow. Additionally, green areas in cities help reduce the severity of the urban heat island phenomenon (i.e. when the temperature in areas with high population density is higher than in those which are more sparsely populated), which in extreme circumstances can have severe consequences, including increased mortality rate.

Normally, we don’t think of stale air as polluted, particularly in terms of carbon dioxide. So let’s come back to plants and oxygen production. House plants are the ones that have been most extensively researched. The conclusions, although not shocking, do indeed suggest that a sufficiently high number of plants can reduce the amount of carbon dioxide by several percent. According to some papers, 5 square metres of foliage could compensate for a constant presence of one person in one room. Offices and public spaces (such as libraries and lecture halls) could use more plants to reduce their requirement for energy (used for artificial ventilation).

In summary, it’s worth to keep trees in the cities, even though oxygen production is not their main advantage. Green areas have multiple purposes, including ones not discussed in this article. As for smog, we shouldn’t be tempted by seemingly easy solutions, but rather seek more complex, complementary ones.