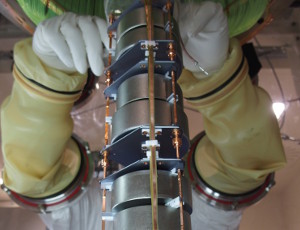 The GERDA experiment aims to explore the nature of neutrinos and attempt to determine its effective mass. One of the most sensitive methods, known as the search for the neutrinoless double-β decay (0νββ) is applied in the study. GERDA is a European project involving scientists from 16 research institutes and universities from Germany, Italy, Russia, Poland, Switzerland, and Belgium.

The team from the Jagiellonian University Institute of Physics is the only Polish research group taking part in the experiment. The evolution of the project, driven by the necessity to improve the detector sensitivity during its subsequent stages, requires systematic background suppression, which is precisely what the JU research team specialises in.

The latest issue of the Science journal features an article by the GERDA collaboration entitled ‘Probing Majorana neutrinos with double-β decay’, which describes the results of the searches for the hypothetical neutrinoless double-β decay of 76Ge that have been obtained so far. The measurements are conducted in the underground laboratory in Gran Sasso, Italy by an international research group which includes five scientists from the JU Institute of Physics: Prof. Marcin Wójcik, Dr Marcin Misiaszek, Dr Krzysztof Panas, Dr Krzysztof Pelczar, and Dr hab. Grzegorz Zuzel.

The research presented in the article aims to find answers to some of the most basic questions of modern particle physics. Are neutrinos their own antiparticles? What is the absolute mass scale of neutrinos? Can the asymmetry between matter and antimatter in the universe be explained based on the properties of neutrinos? Many extensions of the Standard Model of particles consider neutrinos to be essential for the understanding of the present dominance of matter over antimatter, assuming that they are their own antiparticles (the so-called Majorama particles). This would imply the presence of extremely low frequency of radioactive decay, during which two neutrons are turned into two protons inside the nucleus without emission of any (anti)neutrinos, which violates the lepton number conservation rule.

The possibilities of finding the neutrinoless double-β decay are limited by the presence of natural radioactivity (the ‘background’), which can imitate the searched for signal. The GERDA experiment succeeded in obtaining an extremely low level of the background by using a high purity shielding against radiation made of water and liquid argon. Besides, the researchers employed sophisticated software methods to identify and eliminate the residual background, co-developed by the JU research team. This has made GERDA the first experiment allowing the measurement of the half-life of neutrinoless double-β decay longer than 1026 years, that is, 16 orders of magnitude longer than the age of the universe. For such half-life, there would be no more than a single decay per 18 years in one kilogram of 76Ge. According to the standard interpretation of the neutrinoless double-β decay, the half life can be related to the so-called effective (Majorana) neutrino mass, whose upper limit in the case of GERDA can be set between 0.07 and 0.16 eV/c2.

The JU scientists’ research is funded by the National Science Centre and the Foundation for Polish Science.