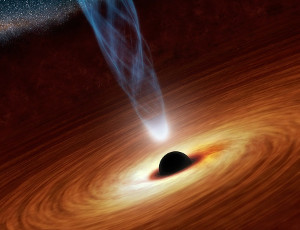 A very recent observation of a predicted flaring from a distant galaxy by the Spitzer Space Telescope has firmly established the existence of a massive black hole pair emitting nano-Hertz gravitational waves which should assist the on-going international efforts to directly detect such waves. Spitzer observation is also constraining a unique property of black holes, explored by Stephen Hawking and collaborators.

Scientists, including Professor Stanisław Zoła from the Astronomical Observatory of the Jagiellonian  University, describe the results of their research in the latest issue of the Astrophysical Journal Letters (https://doi.org/10.3847/2041-8213/ab79a4).

A year ago, the first true image of a black hole was published, using observations of a nearby galaxy M87 by the Event Horizon Telescope. The image has a black centre with a bright ring of light around it. But is it a true black hole as described by the theory of General Relativity by Albert Einstein? In order to qualify, this black object has to satisfy certain requirements: its only possible properties are its mass, its axial spin, and possibly electric charge. In other words, it must be perfectly smooth, no bumps on the surface are allowed. This requirement has become known as the no-hair theorem, and it was first discovered by  Werner Israel, Brandon Carter and Stephen Hawking in Cambridge in late 1960's and early 1970’s. Princeton physicist John Wheeler called this theorem jokingly the no-hair theorem, as it excludes hair on the surface of a black hole, among all other non-smoothness.

A simple way to prove the theorem was proposed by Kip Thorne at the California Institute of Technology (Caltech) about ten years later. He proposed that we study the motion of a satellite around a black hole with great care. If the black hole has any bumps, or 'hair', then the orbit of the satellite will be twisted in a specific, recognizable way.

Now we only have to discover a satellite which circles around a potential black hole candidate. Such a satellite was indeed discovered in a system called OJ287 in 1988. The 'satellite' is itself a black hole but so much less massive than the primary black hole under study that it can be used as a test satellite. Since then, for the next 30 years, the orbit of the satellite has been under intensive study. After numerous observing campaigns, mainly led by Mauri Valtonen  from the University of Turku, Finland, the satellite orbit was finally solved two years ago with the accuracy required to test the no-hair theorem.

The information about the motion of the satellite comes in the form of signals which arise when the satellite pierces a layer of gas which circles the primary black hole. It is hard to miss these signals. The emission of light suddenly increases in OJ287 by the amount which corresponds to switching on a million million suns in one day, i.e., more than the brightness of a whole galaxy. The signal is also easy to recognize because the generated light is bluer than the normal red light of OJ287. Determining the exact hour when the signal occurs allows one to determine the details of the satellite orbit and thus to probe the validity of the no-hair theorem.

The next signal generated by the satellite was predicted to arise on July 31, 2019. At that time it was impossible to study OJ287 from Earth. Fortunately, there existed a space observatory called Spitzer which was so far removed from Earth that it could take a good look at OJ287. The observatory was operated by Caltech on behalf of NASA. A group of scientists led by Seppo Laine from Caltech used Spitzer to monitor OJ287 from July 31 to September 3. Not only did they discover the expected rise in the brightness of the signal, but found that it arrived within 2.5 hours of the predicted time. The signal was so close to being bang-on-time that there cannot be any significant 'hair' in the primary black hole. Even small bumps at the 15% level in the black hole surface would have thrown the satellite off course and would have shifted the time of the rise of the signal beyond observed limits.

Thus it is now proven that at least the black hole of OJ 287 is a true black hole as described by General Relativity. And by extension, it is likely that the same can be said about the black hole in M87 and in other galaxies where such objects have been suspected.

The satellite observations were complemented by using ground based telescopes as soon as it became possible. A number of observers joined in to check the expected color of the signal. Indeed, the color was bluer than normal. The light signal was emitted from gas at the very high temperature of 300,000 degrees, 50 times hotter than the surface of the sun, and from a volume which is about twice the size of our Solar System. The primary black hole itself has a huge radius, about nine times the size of the Solar System. Even at the distance of 3.5 billion light years from us its surroundings are still bright enough that it can be seen even with small amateur telescopes.

These observations are setting the stage for the on-going efforts by the Event Horizon Telescope  to image the black hole pair in OJ 287 and the International Pulsar Timing Array to detect nano-hertz gravitational waves from such black hole systems. 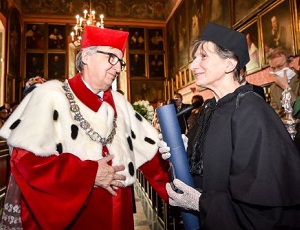