In search of the lost silence. Haiga and sumi-e exhibition 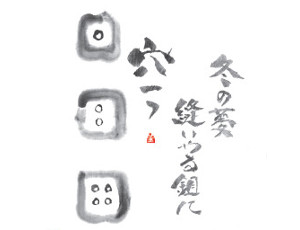 We live in difficult times, in which moments of tranquility and solitude are indispensable for our well-being and coping with existence. There are many types of silence and everybody experiences them differently. The experience of Lidia Rozmus is reflected in three verses of haiku, in one or two brush strokes of sumi-e, in several lines drawn with a coloured pencil, or in a single shot with a camera.

The book and exhibition show four seasons of the year in all their beauty and calmness, accompanied by selected haikus. The exhibits will also include a series of sumi-e presented on scrolls. The book-portfolio In Silence  静けさに  W ciszy – haiga consists of 18 folders, each of which comprises three versions of haiga (haiku with a picture). The poems (haiku) in English are accompanied by photographs by Iwona Biedermann and Lidia Rozmus, whereas the poems in Japanese are illustrated with sumi-e paintings by Lidia Rozmus with Masanobu Koshikawa’s calligraphy, and those in Polish are presented along with Lidia Rozmus’ coloured pencil drawings on black cardboard.

Lidia Rozmus, a Polish painter and haiku poet, has long been fascinated with Japanese art and esthetics. She graduated from the Jagiellonian University in the History of Art and since 1980 has been working in the USA as a graphic artist. She paints sumi-e and oil paintings, writes haiku and works as the Art Editor of the journal Modern Haiku. Lidia Rozmus has authored book arts which include haiku, haibun and haiga. She has received the Haiku Society of America Merit Book Award for Design. Her works have been exhibited and published in the United States, Japan, Poland, and Australia, where she has also run workshops and gave lectures on Japanese esthetics and art.

She was fortunate enough to study sumi-e with such masters as Madeleine Stanley-Jossem, Qigu Jiang and Shozo Sato.

When asked about the reasons behind creating the book-portfolio In Silence  静けさに  W ciszy – haiga, Lidia Rozmus said: “For most of my life my work and existence have been greatly shaped by three different cultures: Polish, Japanese and American, as well as three different geographical places. Fortunately I can find a sort of unity in all three. As for the book, my message is clear: In the middle of chaos and noise of everyday life, the salutary silence can only be found inside ourselves, so that we could say:

no beginning no end