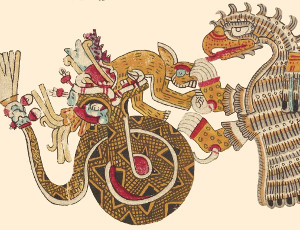 The conference will be accompanied by the presentation of manuscripts from the Alexander von Humboldt archive and items from the Manuscripta americana collection of the former Prussian State Library in Berlin, currently kept in the Jagiellonian Library.

The conference Treasures of Mexico, marking the 250th anniversary of the birth of the eminent researcher Alexander von Humboldt will be a valuable contribution to the discussion about this great scholar as well as the history of Mexico and its conquest.

The presentation held along with the conference will show Mexico-related manuscripts by Alexander von Humboldt as well as items from the Manuscripta americana collection, including originals and facsimiles of manuscripts. Both collections come from the former Prussian State Library in Berlin kept in the Jagiellonian Library.

Alexander von Humboldt was the father of modern geography, who revolutionised the knowledge about nature. This Prussian geographer, naturalist and traveler has been a very important figure in the history of Latin America. Known for his humanitarian attitude, which was reflected in his opposition towards slavery as well as oppression and exploitation of Native Americans, Alexander von Humboldt meticulously described the difficult living and working conditions of the local communities during his travels in Latin America. He also diligently studied and described the geography of this part of the world. His books are still an important source of knowledge about the 19th-century Mexico.

During the conference, researchers from the Faculty of Liberal Arts of the University of Warsaw will discuss their work on documents in Nahuatl language and present their discoveries to date.

The conference, held in English, will feature Dr Szymon Gruda from the University of Warsaw (who will present his research conducted together with Dr Julia Madajczak), Dr Monika Jaglarz (Jagiellonian Library) and Dr Patrick Johansson Kéraudren (National Autonomous University of Mexico - UNAM). The discussion will be moderated by Dr Adriana Haro-Luviano (UNAM Mexican Center in Berlin).