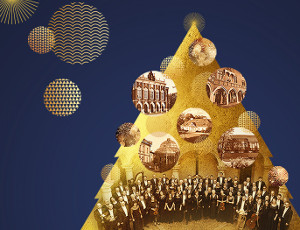 The Jagiellonian University, the Karol Szymanowski Philharmonic and the Kraków Festival Office will hold the University New Year Charity Concert, featuring pieces by Strauss, Dvořák, Bizet and other composers, performed by the JU Academic Choir Camerata Jagellonica as well as soloists and chamber musicians of the Kraków Philharmonic.

The charity concert will be available to watch online. It aims to support the medical staff and patients of the University Hospital in Kraków and the Children’s University Hospital in Kraków, for whom 2020 was an especially challenging year. The entire income from ticket sales will be donated to these two hospitals. Buying a charity ticket for 20,  50, 100, or 150 zlotys will allow the donors to watch the concert on the VOD PLAY KRAKÓW platform for up to one week after the purchase. The ticket sales will start on 3 January and finish on 31 January, after which the conncert will be no longer available on the platform.

The ticket sales will start on 3 January 2021. It is also possible to help the hospitals by donating directly to:

The concert viewers will get immersed in Christmas and New Year’s spirit thanks to the music by Joseph and Johann Strauss, Fritz Kreisler, Antonín Dvořák, Georges Bizet and Béla Kovács, including such pieces as: "The Blue Danube", Die Fledermouse overture, Finale of Dvořák’s String Quartet in F-major, and “Schön Rosmarin” from Kreisler’s Alt-Wiener Tanzweisen collection.

It will also be possible to “visit” some of the most beautiful and interesting places of the Jagiellonian University, as the performance was recorded in the stately assembly hall of Collegium Novum, the historic building of Collegium Maius, the Manor House in Modlnica, the state-of-the-art Faculty of Chemistry building, as well as the JU Botanical Garden.

On 6 January the entire JU academic community will get an e-mail granting one-week-long free access to the concert (regardless of the access via the VOD PLAY KRAKÓW platform).

Please enjoy the concert and, if possible, support our hospitals.