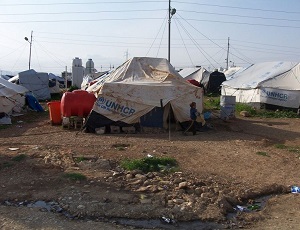 20 June marked the World Refugee Day. According to the latest estimates from 2018, over 70 million people worldwide were forced to leave their homes and countries by a variety of causes. Anita Zalisz, student of the JU MC Institute of Public Health and volunteer at a refugee camp in Syria working with children, shared her insights into the issue of migrant crisis in the context of public health. The article below was originally published in Polish on the blog of the JU MC Institute of Public Health.

Before we get into the details of how the current crisis is going to affect public health, we’ll need to clarify a few things. Mainstream media reports tend to use (indeed, overuse) the term ‘migrant crisis’ to describe the situation we're currently in. A migrant is a person that willingly chooses to abandon a country in order to pursue their goals, be it higher standards of life, a well-paid job, or better education. Conversely, according to the Geneva Convention,1 a refugee is someone who was forced to leave their country ‘owing to well-founded fear of being persecuted for reasons of race, religion, nationality, membership of a particular social group or political opinion’. It’s important to know the difference and not to confuse these two. The situation we’re dealing with right now can be better described as a ‘refugee crisis’, and it’s one of the most important challenges in public health.

The latest and most accurate data on the crisis, provided by the United Nations High Commissioner for Refugees (UNHCR), show that at the end of 2018, about 70.2 million people worldwide were displaced from their homes.2 This means that since the beginning of the conflict in Syria in 2011, the number has risen by around 40%. Every day, 44,000 people are forced to flee persecution or armed conflict. According to UNHCR, as much as 57% of all refugees come from Syria, Afghanistan, and South Sudan. In mid-2015, Europe experienced the greatest refugee crisis since World War II. So dramatic a rise has exceeded the capabilities of even the largest and most powerful government and non-government organisations tasked with peacekeeping and providing social assistance.

The journey that the refugees are forced to undertake often takes several weeks, if not months. During that time, they are constantly at risk of exposure, violence, and starvation. Many of them are in urgent need of medical help. In 2015, in the span of just two months, more than 70 children have lost their lives on their way to Europe,3 which shows just how dangerous it is to attempt to reach the continent by sea. Changes in policies and increasingly tight border control cause refugees to search for other, even more perilous routes. If they manage to successfully arrive in Europe, they make their way to refugee camps, which are mostly overpopulated and lacking in food, sanitation, medicine, and personnel.

Long-term stay in such conditions can be a threat to both physical and mental health. Adults are most frequently diagnosed with infectious respiratory and digestive system diseases as well as cardiovascular diseases. Children are more prone to suffer from mental health issues, often manifesting in the form of post-traumatic stress disorder (PTSD) and depression.4 It’s estimated that before the conflict in Syria became aggravated, vaccination coverage levels in this country were as high as 91%, while in 2013 they plummeted to about 45%.5 In 2015, the UNHCR made a crucial decision to introduce a special vaccination programme for refugees and migrants.6 Overall, conditions vary between countries and even camps, but in any case, it’s necessary to consolidate health care, social, and international policies to remedy the situation.

A year ago, I had the opportunity to briefly visit the largest Greek refugee camp, Moria, located on the island of Lesbos. Although I knew what to expect, it was still a shocking experience. A colourful welcome sign painted by people receiving help from local NGOs was visible from a considerable distance. However, it didn’t do anything to dispel the anxiety of entering a refugee camp. In fact, it was the opposite because of the stark contrast between cheerful-looking gate and the camp itself. Another sign, made by the camp’s inhabitants, bluntly described Moria as ‘hell’ and ‘prison’. The average waiting time for asylum seekers varies from six months to two years.

In 2018, Moria housed nearly 9,000 refugees – three times its maximum capacity. The camp is divided in three sectors. The largest one is assigned to adult men that came there alone. The second one, which is also the smallest, shelters families. The third sector is inhabited by women, including mothers with children and mothers-to-be. These three parts are separated by makeshift walls and gates watched over by guards. This makes it impossible to get from one sector to another without a permit. However, due to lacks in staff, the gates are only guarded until 11:00 p.m. After that, nothing can stop people from moving between sectors, for instance, it’s no problem for men to enter the part reserved for women. Volunteers at Moria are forbidden to enter the camp after dusk. Hot water is only available in a few places, and only until 10.00 p.m. Mothers give birth in overcrowded and dirty tents, often without any assistance from the medical staff.

Non-government organisations and local communities try to help the refugees in Moria in various ways. They collect food and personal hygiene products and help parents babysit. Poliana, an NGO located in Mytilene (Lesbos), is dedicated to helping women and children in Moria. Every year, they recruit volunteers to provide education for children brought up in the camp. I have witnessed their work first-hand and I can confirm that even the smallest bit of help can change things for the better.

When talking about the refugee crisis, we need to remember that it doesn’t only affect those who have been directly impacted by it. It affects all of us, because we’re obligated to help refugees, both morally and legally.7,8