Are we going to face a food crisis?

The global population, currently estimated at 7.6 billion, is steadily growing. The need to increase our food production in order to provide sustenance for more and more people is a critical, albeit controversial issue, chiefly due to environmental protection concerns. Is our rapidly changing society standing on the verge of a serious food crisis?

Since 1960, the number of people that inhabit the Earth has doubled. On the surface, it’s neither surprising nor terrifying – obviously, advances in medicine and higher quality of life have contributed to this state of affairs. What is much more disconcerting is the fact that even then, in the early 1960s, there were already too many people. And now there’s two times more. Where are we going to find food such a vast (and still expanding!) human population? Is more production really the answer?

Based on an analysis made by Dr hab. Paulina Kramarz, Prof. UJ from the JU Institute of Environmental Sciences, we summarised the main aspects of the looming crisis. 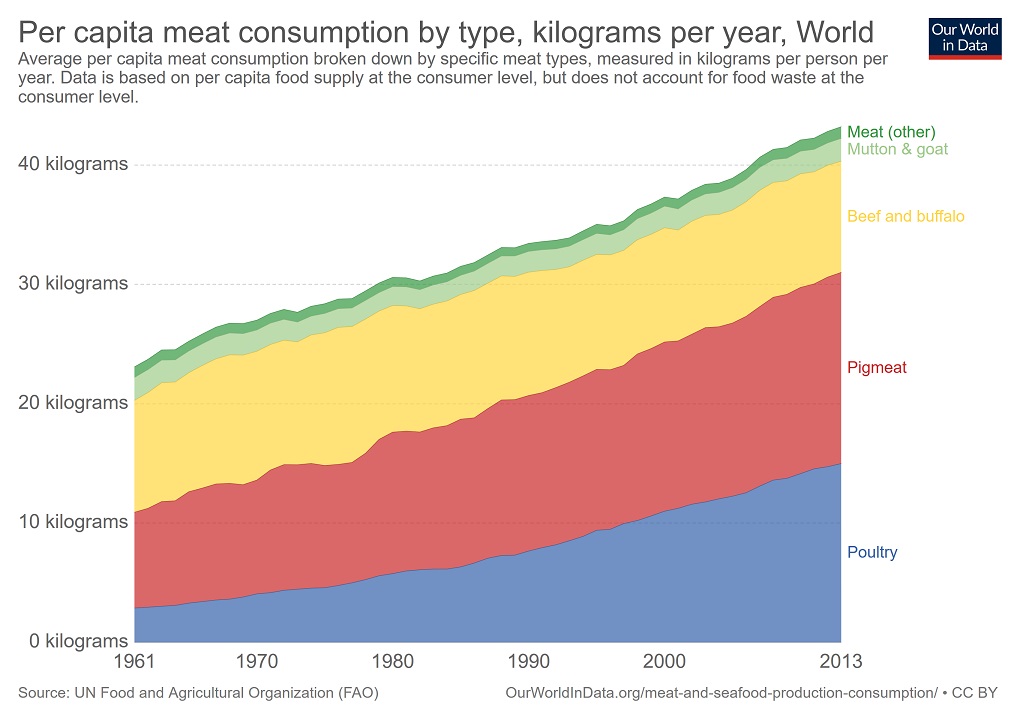 To fully understand the nature of the problem, we have to go back in time over half a century. The desire to eradicate world hunger and poverty was becoming increasingly popular in the 1960s, and states of the Global North have decided to attempt to solve the problem. The first success – and the driving factor behind large-scale research and development of mass food production – was the creation of disease-resistant and easy-to-grow wheat types. This ground-breaking innovation radically increased productivity and sparked a series of industrial agriculture programmes around the world. It was dubbed the ’Green Revolution’.

Developing more efficient ways of cultivating crops and producing pesticides and artificial fertilizers has immediately intensified the growth of the new branch of industry. Giving birth to a number of corporations specialising in agricultural chemistry, seed processing, and animal antibiotics, it soon became one of the most profitable markets in the world. From that moment, for the first time in history, food was produced by a global conglomerate that was inexpensive to run, efficient… and ruthless. As a direct result, over a billion people were saved from starvation. This, in turn, caused a dynamic increase in human population, as more or less readily available food led to increased survivability.

It quickly turned out that the Green Revolution wasn’t as green is it was made out to be. Profit-oriented corporate policies of newly formed businesses overlooked the industry’s negative effect on the environment. Though it succeeded in feeding people, the Green Revolution triggered mass decrease in biodiversity over huge areas that were turned into monoculture farms. Pesticides, fertilizers, and waste increased the pollution of soil, water, and air. There are still no estimates as to how many people have died, and are still dying, because of the contamination of the environment with toxic substances.

Modern agricultural industry constantly introduces new synthetic pesticides and bio-engineered crops that increase the efficiency of food production. To back up their arguments, companies often use the Green Revolution as an example of positive change brought by activity. Unfortunately, its harmful aspects are never discussed.

A bowl of beans vs. a supermarket chicken 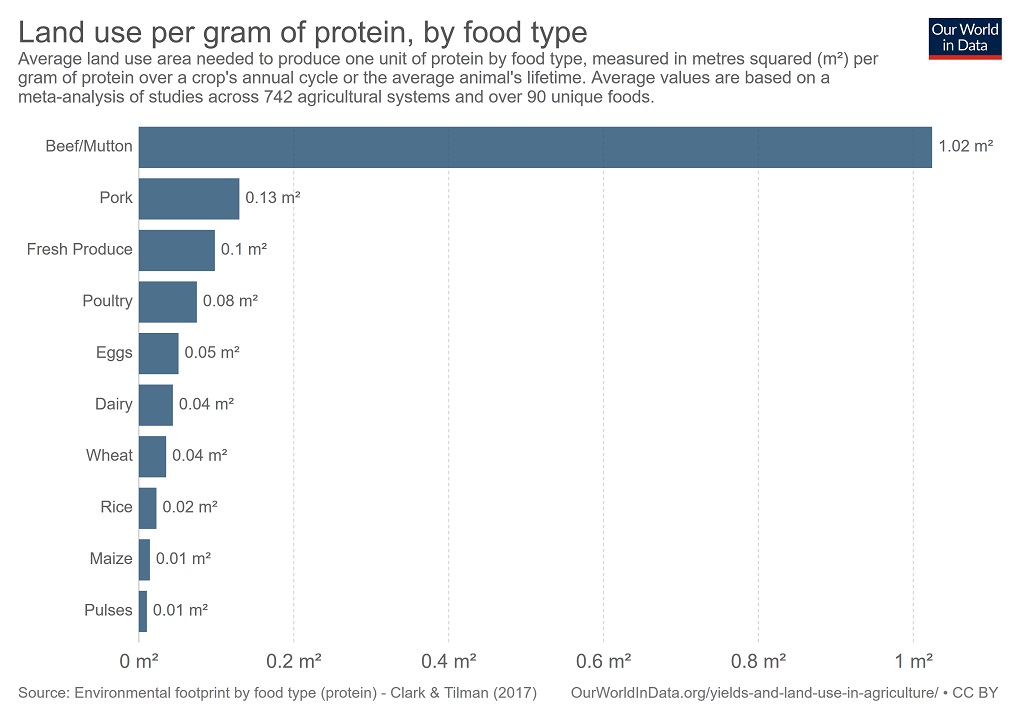 How does food production look today, after over five decades of development of global agricultural industry? To be able to answer this question, we have to take several facts into consideration. Currently, agriculture takes up roughly half (about 51 million square kilometres) of habitable land on Earth. Out of that, over three quarters (40 million square kilometres) is reserved for animal husbandry. However, the energy requirement for world population is mostly covered by plant-based food (83%), with meat and dairy making up the rest (17%). Plants also provide us with two thirds (66%) of the protein we need. What’s more, producing plant-based protein requires only one percent (!) of the agricultural area we use to produce animal-based protein.

The visible dissonance between excessive meat production and its relative redundancy in our diet is considered a serious anthropogenic and environmental issue of our times by many scientists. Given that an average person living in the Global North eats between 60 and 150 kilograms of meat a year, and has a one in four chance of being overweight (i.e. with BMI of over 30), it’s very easy to demonstrate the flaws of modern industrial agriculture.

A simple thought experiment in which we reverse the proportions of plant-based and animal-based food production very clearly shows the scale of the issue. According to calculations, such decision would allow us to meet the energy requirements of 21 billion people (also meeting the protein requirements of 16 billion people in the process). In addition, it would require no changes in the intensity of production whatsoever.

Roses instead of lunch 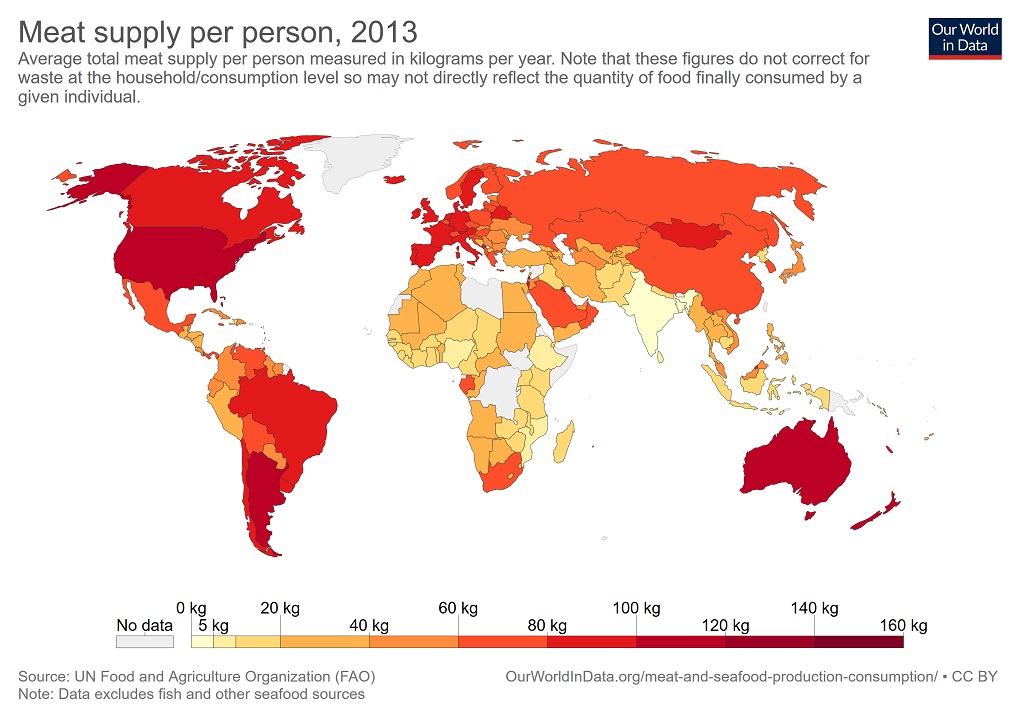 Irrational proportions in the agricultural industry are not the only factor leading to food shortages. Food waste is another problem. Its extent is estimated at 25–40% of the entire production. This amount of food would be sufficient to feed 3 billion people, which is exactly how many more there will be in a few decades. To illustrate the how much food is wasted, let’s just say that the space needed to produce it is equal to the area of China.

Few people know that the industrial agriculture of the Global South is in many cases unrelated to food that its inhabitants so desperately need. Instead, farmers cultivate non-essential plants to be exported to the Global North. One of the most controversial examples are the roses grown in Kenya which account for 38% of those sold in Europe. Low pay, high-pollution transport system, synthetic pesticides, and preventing local population from using its land to grow food are just some of the pieces of this complex yet illogical puzzle.

Crisis at our door

Excessive production and consumption of animal-based foods is a direct cause of soil degradation, decrease of biodiversity, increase in pollution, and poor nutrition quality of food in our households. Aside from producing large amounts of methane and thus directly contributing to the greenhouse effect, industrial animal farms use huge quantity of water and electricity as well as generate significant amount of waste. They’re also poorly adapted to the changing climate and natural disasters.

Finding the right solution to tackle the current food crisis is a daunting task. Data suggests that increasing food production and creating more large-scale monoculture farms is both ineffective and irrational. Feeding the growing global population requires sustainable methods that won’t harm the environment. Re-evaluating the proportions between farming and animal husbandry is the key element of this issue. It’s the only way to ensure Earth will be a home to the future generations.

Dr hab. Paulina Kramarz, Prof. UJ from the JU Institute of Environmental Sciences is the co-author of 43 publications on land invertebrate ecology, many of which are related to ecotoxicology and GMO crops. She helped create the Polish National Strategy for Pollinator Protection. Currently, she is focused mostly on evolutionary and ecological aspects of insect physiology. Her interests include biological crop protection and agroecology.