JU Professor honoured by the University of Montpellier 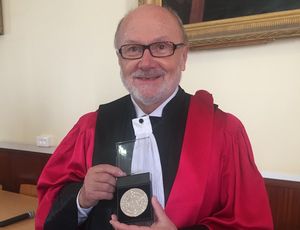 Prof. Maciej Pawłowski, the long-time Head of the JU MC Chair in Pharmaceutical Chemistry and a former Dean of the Faculty of Chemistry at the Jagiellonian University Medical College (JU MC) was awarded with the University of Montpellier Medal, which was presented during a meeting within the framework of the Polish-French year of Science, organised under the auspices of foreign affairs ministries of both countries.

The cooperation between the JU MC Chair in Pharmaceutical Chemistry headed by Prof. Pawłowski  and the Max Mousseron Institute of Biomolecules at the University of Montpellier dates back to the 1970s. The partnership produced numerous international research papers, patents, and implementations in the pharmaceutical industry.

The JU professor received the medal for his research output, especially for the achievements in the search for new biologically active compounds present in both cardiovascular and central nervous system and for his role in fostering cooperation between the Jagiellonian University and the Faculty of Pharmacy at the University of Montpelier. As stressed by Prof. Jean Martinez in the laudatory address, the achievements of Prof. Pawłowski’s research team included the discovery of P-23 and several other substances with potential pharmaceutical applications, which are now undergoing preclinical trials.

At the medal presentation ceremony, the oldest Polish university was represented by the Dean of the Faculty of Pharmacy Prof. Jacek Sapa, the Vice-Dean of the Faculty of Pharmacy Prof. Anna Wesołowska, Dr Maciej Gawlik and Dr hab. Maria Walczak, Prof. UJ from the Chair in Toxicology, as well as Dr Katarzyna Grychowska and Prof. Paweł Zajdel from the Chair in Pharmaceutical Chemistry.

The visit to France was also an occasion to discuss the prospects for strengthening and enhancing the collaboration between the partner faculties from both universities in such fields as student exchange, joint graduate research projects and courses in the field of pharmacy.