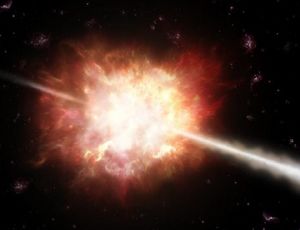 After a 10-year-long search, scientists have finally detected a very-high-energy (VHE) gamma-ray burst. The discovery was made by the international research team of the High Energy Stereoscopic System (H.E.S.S.), using the 28-metres long telescope located in Namibia. It unexpectedly turned out that this burst resulting from a cosmic cataclysm remained within the VHE gamma spectrum very long after the initial explosion.

Gamma ray bursts result from space explosions and last for a short time – usually several dozen seconds. They are the brightest known bursts in the universe. Long after the gamma burst, an afterglow can be observed in the X-ray, optical and radio wavelength. The energy from a short gamma burst is emitted in the form of photons which are about a million times more energetic than photons of visible light. The radiation consisting of such photons can only be spotted by instruments installed on satellites. Until recently, the question whether such a gamma-ray burst is accompanied by an emission in the VHE spectrum (photons with an energy 1000 times higher than photons of visible light) remained unanswered.

On 20 July 2018, satellite observatories Fermi and Swift detected a 50-second long gamma burst, which was named GRB 180720B. A number of optical observatories soon started to watch parts of the sky where the burst was spotted, in search of its optical afterglow.

For the H.E.S.S. observatory telescope network this location was not available until ten hours later. Despite this fact, the team decided to carry out the observation, hoping that they would be able to spot the GRB 180720B blast in the VHE spectrum. Their efforts proved successful, indicating a new source in the same place where the afterglow had been spotted earlier. The discovery of gamma VHE emission from a gamma-ray burst has been expected for over 10 years, but no one envisaged that there would be such a strong afterglow so long after the burst. This groundbreaking discovery provides a new insight into the nature of space gamma-ray bursts.

The discovery was discussed in the article A very-high-energy component deep in the γ-ray burst afterglow, published on 20 November 2019 in Nature. The international research team included Polish scientists from five research institutions: the Jagiellonian University (dr hab. Marek Jamrozy, Prof. UJ, Prof. Michał Ostrowski, Dr hab. Łukasz Stawarz, Prof. UJ, and Angel Priama Noel from the JU Astronomical Observatory), the University of Warsaw, the Nicolaus Copernicus Astronomical Center of the Polish Academy of Sciences, the Nicolaus Copernicus University in Torun, and the Institute of Nuclear Physics of the Polish Academy of Sciences. Polish researchers have taken part in the work of H.E.S.S. since 2005. It is worth stressing that Poles also contributed to the construction of the giant telescope used for the latest discovery.