The right, the left and climate change. A paper by JU Institute of Psychology researchers 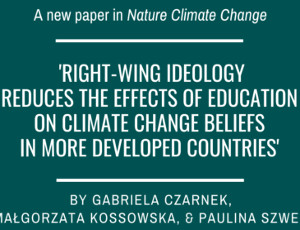 How does education and political views influence one’s opinion on climate change? Gabriela Czarnek, Małgorzata Kossowska and Paulina Szwed from the Jagiellonian University Institute of Psychology have decided to investigate the matter, which resulted in their paper Right-wing ideology reduces the effects of education on climate change beliefd in more developed countries being published in the latest issue of Nature Climate Change.

What are the reasons for choosing global climate changes and not some other polarising issues that we encounter in the modern public discourse? ‘The issue becomes more and more pressing: according to the Intergovernmental Panel on Climate Change (IPCC) report from 2018, if the global temperature continues to rise at its present pace, then in the coming decades the average global temperature will rise by 1.5°C compared to the time before Industrial Revolution. As a result, extreme weather conditions and massive ecosystem destruction will affect the lives of many people, their health, food and water, just to name the most basic consequences’, said Dr Gabriela Czarnek.

‘It’s important to note that in a lot of countries the issue is considered controversial and fuels political arguments. Thus, the discussion on climate change and any actions or lack thereof have an effect on society’, added Prof. Małgorzata Kossowska.

Who believes in climate change and who does not?

Previous studies, conducted chiefly in the United States, have shown that education is not a big influence on one’s opinion on climate change. However, once the analysts took into account the political views of the interviewees, they turned out to be a major factor modifying that relation. Studies have shown that the more educated a left-leaning person was, the more probable it was for them to properly assess the scale and causes of climate change. They have also expressed more favourable opinions on climate change prevention. Conversely, in the case of right-leaning interviewees, education had either insignificant or negative effect on their views on climate change. Some research shows that, regardless of the level of education, this group of people believes that even if global climate changes really are happening, they are not the result of human activity. Other studies even suggest that for people with right-wing views, higher level of education actually increases the chance of outright denial of climate change or the role of humanity in the process. This phenomenon could be called the ‘educated right paradox’. JU researchers have chosen this as their starting point.

‘We were wondering if this phenomenon could be observed outside of the US, where most of this type of research projects were previously conducted. We suspected it might not be a universal property, since our earlier analyses focused on smaller groups of people from Poland suggested as much’, explained Prof. Małgorzata Kossowska.

The researchers assumed that the process of shaping opinion on climate change is affected by the country’s development. Therefore, their analyses take into account the Human Development Index (HDI), which is based on several factors, such as life expectancy, education and per capita income. On the basis of previous studies, the researchers presupposed that as HDI increases, the country’s care for the environment increases, but at the same time the subject becomes more controversial and politicised. The right frequently prioritises business and economic growth over the environment, while the left often stresses the importance of nature over the economy. The research team expected that in highly developed countries, the influence of education on climate change would be directly related to political views on climate change. In less developed countries, education would play a key role in this issue.

‘To verify this, we analysed data from more than 100,000 interviewees from 64 countries with varying level of development. We haven’t found any proof for the educated right paradox hypothesis, although, as we expected, the relationship between education and stance on climate change is modified by political views. Education contributes to climate change awareness in left-wingers, while right-wingers exhibit very little or no such effect. In countries with lower HDI, political opinions are not in any way related to views on climate change, but the level of education does: the higher it is, the more important the environment. Although there are exceptions to this rule’, said Dr Gabriela Czarnek.

‘The effects of education on people’s climate change beliefs vary as a function of political ideology: for those on the political left, education is related to pro-climate change beliefs, whereas for those on the political right, these effects are weak or negative. This phenomenon has been examined mainly in the US, where climate change has become a highly politicised issue; however, climate change is less politicised in other contexts. . . . The current findings suggest that US-centric theories on the topic should not be generally applied to other contexts uncritically’, reads the abstract in Nature Climate Change.

But how does the relationship between education and the opinion on climate change look like in Poland? ‘Our analyses based on 2016 data suggested that in Poland, political views do not play a significant role in the public opinion about climate change. Education, on the contrary, is the important factor. Educated people are more likely to believe that humanity contributes to climate change and needs to actively prevent it’, explained Prof. Małgorzata Kossowska.

‘We can’t underestimate the role of education, since it’s crucial in shaping the opinion on climate change. However, as the issue becomes politicised, political views become much more important in the public discourse around the environment and climate change prevention’, concluded the paper’s authors. 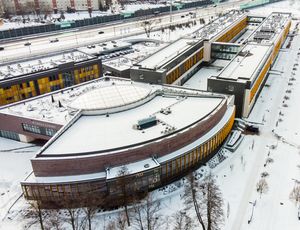 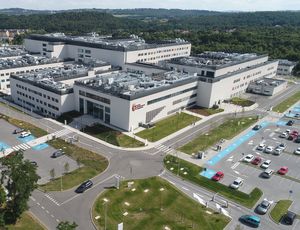 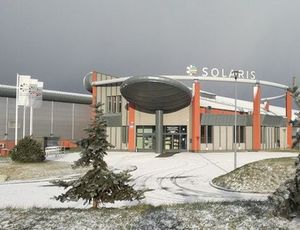 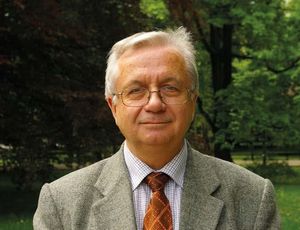