Studies into the mechanisms of photosynthesis have been conducted for a long time. This unique process is of special interest to scientists, as at helps plants to utilise solar energy on a mass scale. Until now some chemical reactions determining this process remained unknown. This has changed thanks to new research conducted by a group of scientists, which includes researchers from the Jagiellonian University. Dr Michał Gabruk from the JU Faculty of Biochemistry, Biophysics and Biotechnology sheds some light on this issue.

The article co-authored by JU Researchers was published in the latest issue of Nature Plants journal.

Life of nearly all organisms on the Earth – directly or indirectly – depends on photosynthesis. That is the process which produces oxygen we breath and organic molecules we eat. Chlorophyll molecules play a fundamental role in this process. Chlorophylls are responsible not only for the green color of leaves but primarily for the absorption of sunlight, whose energy fuels the whole process of photosynthesis.

The chlorophyll biosynthesis is a complicated pathway of several enzymes, which gradually transform a small, water-soluble substrate into more and more hydrophobic compounds having better light-absorbing properties. The very last reaction occurs within the lipid membrane and leads to chlorophyll formation. Photosynthetic organisms, therefore, must find a way to guide chlorophyll intermediates towards the membrane and at the same time prepare the lipids for the photosystems, responsible for photosynthesis. Decades of research started in the 1950s revealed that one enzyme - light-dependent protochlorophyllide oxidoreductase (LPOR) - is involved in both these processes. It has been determined that the enzyme forms large complexes with one of the chlorophyll intermediates, but only in darkness. Interestingly, the exposure to light allows the enzyme to perform catalytic reaction, which results in a slight modification the pigment bound within the complex. The mechanism of the formation of these light-dependent complexes, their structure and the reaction mechanism has not been determined. 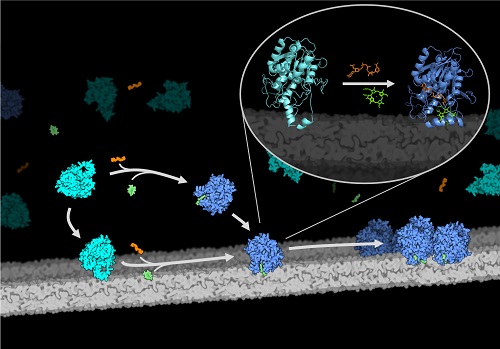 In our work we used LPOR produced by genetically modified bacteria, the chlorophyll intermediate purified from wheat seedlings, as well as a unique mixture of lipids, salts and other compounds required by the enzyme to form complexes nearly identical to these found in living plants. In collaboration with the scientists from the University of California San Francisco and with the use of cryo-electron microscopy, we obtained thousands of pictures of the complexes and based on them we reconstructed their 3D structure with nearly atomic resolution.

We found out that LPOR is integrated into the membrane after the binding of the substrates, and, surprisingly, directly interacts with one of the lipids. This induces conformational change of the enzyme which leads to the oligomerization, that is to the combining of multiple molecules into a larger complex. The oligomerization is not random though: firstly the single molecules of the enzyme combine to form strands, which next entangle together to form larger filament. Because each individual molecule of the enzyme bind lipids, the lipid membrane is drawn inside the filaments and tightly compressed. At the same time, the enzyme inserts the chlorophyll intermediate into the membrane. The whole process of the filament formation is quick and efficient, and occurs only in darkness. One flash of light is enough to trigger the catalytic activity of the enzyme, which leads to the disintegration of the whole complex within minutes: the lipids trapped inside are released with the chlorophyll intermediate inserted in the membrane, which, in fact, is the first step of the formation of the photosynthetic membranes. The structure of the complex with a near atomic resolution we have obtained allows us to see how the enzyme binds the pigment. This will help to determine the exact mechanism of the light-dependent reaction in the near future.

The formation and accumulation of the filaments of LPOR is particularly intensified in young seedlings partially covered by the dirt, or these germinating underground, in leaf buds, or inside cabbage: namely in all places where leaves do not have access to light. Seeing such a pale yellowish plant tissues we can be sure that filaments of LPOR are slowly disassembling within them, helping to produce photosynthetic membranes and chlorophyll molecules.

Department of Plant Physiology and Biochemistry
JU Faculty of Biochemistry, Biophysics and Biotechnology