We now know more about the diet of our ancestors living in the area now known as Poland as far back as the Neolithic, Bronze Age, and Early Iron Age. An analysis of carbon and nitrogen isotopes found in bones and remains of cultivated plants. Such research projects are carried out by various research centres around the world, including the Jagiellonian University. In the article below, Dr hab. Marek Nowak, Prof. UJ from the JU Institute of Archaeology shares some of his team’s findings.

To fully understand life in the prehistoric times, we must first look at what our ancestors ate. Not only do we need to know how they acquired, stored and processed their food, but also how much food they consumed and when. For years, these issues have enjoyed popularity in disciplines such as archaeology, anthropology, archaeobotany and zooarchaeology. Since we’re unable to gain any insight from written sources (there are none, of course), we need to employ various methods of analysing the physical and chemical properties of the archaeological remains of both the consumers and the foods they consumed. 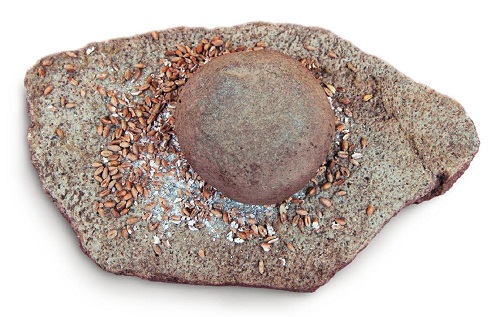 In particular, interesting information about ancient diets can be found though an analysis of the stable isotopes of some elements, which can often be found in the bones of humans and animals as well as plant matter. Currently, the most important analyses are based on two carbon isotopes (12C and 13C) and two nitrogen isotopes (14N and 15N). A research project based on such analyses, which aims to develop a model of food acquisition and consumption profile amongst peoples inhabiting the now-Polish territory in the times of Neolithic (5400–2300 BCE) and Bronze and Early Iron Age (2300–400 BCE), is currently being realised jointly by the Polish Academy of Sciences Institute of Botany (Dr hab. Aldona Mueller-Bieniek, Prof. PAN), Cardinal Stefan Wyszyński University Institute of Biological Sciences (Prof. Krzysztof Szostek), JU Institute of Zoology and Biomedical Research (Barbara Mnich), JU Institute of Archaeology (Dr hab. Marek Nowak, Prof. UJ), and Polish Academy of Sciences Institute of Archaeology and Ethnology (Dr hab. Maria Lityńska-Zając) in collaboration with researcher from the University of Oxford (Prof. Amy Bogaard, Dr Amy Styring) and Princeton University (Prof. Peter Bogucki).

Analyses of stable carbon and nitrogen isotopes in human and animal bones as well as remains of plant matter (mostly wheat, barley and common millet) dated at the aforementioned periods suggest that grain crops were a major part of our ancestors’ diet, with a minimal addition of meat. Previous research projects greatly overestimated the importance of meat in those diets, falsely correlating high concentrations of 15N with increased consumption of meat. In fact, such concentrations might be caused by ingesting plants grown on fertilised soil. These findings are backed up by odontological analyses that revealed significant wear in deciduous teeth, caused by eating large amounts of crudely crushed plant seeds.

The lack of major statistical difference of isotope concentrations between the sexes and different age groups suggests eating in these communities habits were fairly egalitarian.

As mentioned before, research has shown that nearly all crop fields were naturally fertilised, with clear regional differences in the Early Neolithic. It seems fertilising was more intensive in the south of Poland, but regardless of the intensity, such a discovery is a major issue in archaeology, since for many years there has been a debate on when humans first started to fertilise their crops. In light of this research project, it’s possible to say that the practice can be traced back to the second half of the fourth millennium BC, not only in Poland, but all over Europe. Another noteworthy fact is that farmlands, at least in the south of Poland in the mid-Neolithic period, were greatly expanded to areas with more limited access to water and less foliage. This observation complies with previous archaeological hypotheses which dated the major expansion of agriculture at this very period.