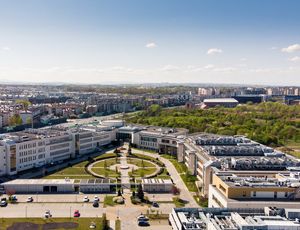 The American Academy of Periodontology bestowed the Clinical Research Award on Prof. Jan Potempa and his research team members Dr Małgorzata Benedyk-Machaczka and Dr. hab. Piotr Mydel from the Jagiellonian University Faculty of Biochemistry, Biophysics and Biotechnology. The scientists were awarded for their pioneering research with clinical relevance and direct application to the practice of periodontics.

The Clinical Research Award is presented for the publication of the most outstanding scientific article with direct clinical relevance in periodontics, which appeared in English in a refereed scientific journal during the previous calendar year. The paper should present new information which may be readily used by practitioners in the evaluation and/or management of patients with periodontal diseases.

The article "Porphyromonas gingivalis in Alzheimer’s disease brains: Evidence for disease causation and treatment with small-molecule inhibitors", authored by Prof. Jana Potempa’s research team was published in Science Advance journal in January 2019. Its authors proved for the first time that the bacteria causing periodontitis can also contribute to the development of Alzheimer disease. They also presented the results of promising research on a new medication blocking toxins produced by P. gingivalis bacteria, which has already entered the second phase of clinical trials (developed by Cortexyme company).