'Wesoła – then and now'. History of Kraków medicine in photographs 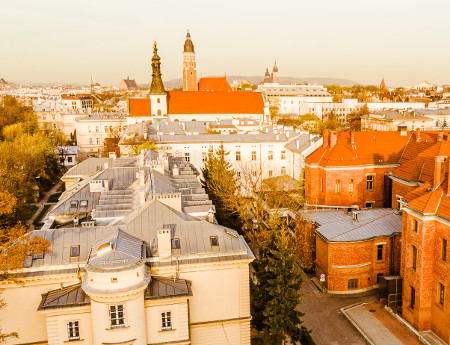 The world’s first gastrectomy and pioneering studies on X-ray tomography are just some examples of historic achievements of physicians from the JU Medical College. The MuFo Museum of Photography in Krakow presents an outdoor exhibition devoted to their accomplishments. The exhibition marks the establishment of the historical-cultural route Via Medicorum, which is being created in Wesoła – a district inextricably linked to the history of Kraków medicine.

Ul. Kopernika forms the main axis of Wesoła historical district. Along this street a number of buildings used for various medical purposes – from education of future physicians to treatment of various kinds of patients - were erected during the last two centuries. Thus it earned the informal Latin name ‘Via Medicorum’ – physicians’ route.

In this very street, the Jagiellonian University (at that time known as Kraków Academy) established the St Lazarus General Hospital in 1788. As time went by, new hospital buildings were erected there.

These beautiful and now historic buildings housed clinics, hospitals and educational premises where patients were treated and physicians trained for more than 200 years. Some key discoveries important for Polish and world medicine took place here: Napoleon Cybulski carried out research into adrenaline, Leon Marchlewski studied chlorophyll and haemoglobin, Karol Mayer laid the foundations for X-ray tomography, and Walery Jaworski pioneered the Polish gastroenterology. It is also here that eminent surgeons, such as Ludwik Rydygier or Maksymilian Rutkowski, operated on patients, the world’s first gastrectomy was performed, bloodletting was finally proved to be of no benefit to patients, a revolutionary method of detecting blood traces was devised, and a bacterium responsible for stomach diseases was discovered.

After more than 200 years, the development and needs of modern medicine forced most clinics of the University Hospital to move to new premises in Prokocim district. Yet, this part of the city will always be remembered as the place crucial for the development of medicine in Kraków, where multiple generations of physicians did their best to save patients’ lives and health. Via Medicorum historical and cultural tourist route pays tribute to this heritage and promotes the achievements of Kraków university medicine and the role it has played in the history of world medicine. On 20 May 2022 the JU Vice-Rector for the Medical College Prof. Tomasz Grodzicki and the Head of the City of Kraków Development Agency Jan Pamuła signed a letter of intent to launch this initiative and the exhibition ‘Wesoła – then and now’ marks the start of this project.

The exhibition comprises unique photographs of the historical district of Wesoła – both the contemporary ones, presenting bird’s eye view of the area (authored by Adam Koprowski from the JU Press Office), and archival pictures, as well as portraits of physicians and scientists linked to the presented buildings.