Do you speak Dolphinese? The language of marine mammals 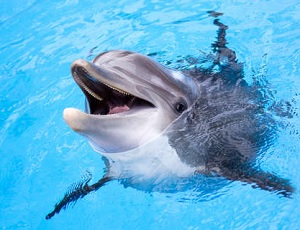 How do dolphins interact with each other? How do they express their emotions? What do good manners mean for them? We have asked these questions to Prof. Vincent Janik from the University of St. Andrews, one of the world’s most prominent researchers studying the language of marine mammals, who has been invited to the Jagiellonian University to give the lecture “Marine mammal communication and the nature of language”.

Professor Vincent Janik has published over one hundred articles mainly devoted to the communication of various marine mammals. His specialisation in this subject has its origins in the long-time personal interest in similarities and differences between the behaviour of animals and human beings. ‘Dolphins, similarly to hominids, can imitate and learn new sounds. My main question was to what extent and how an animal “copying” sounds can later use them in communication?’, explains Prof. Janik. 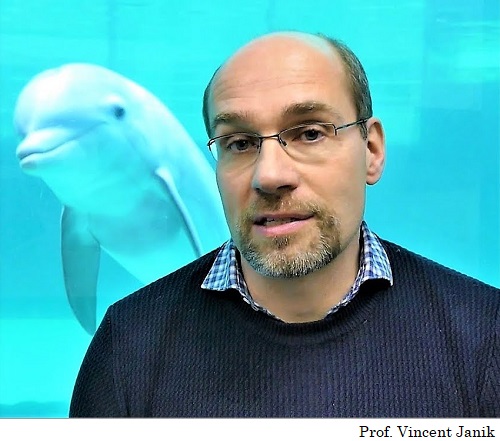 Finding an answer to this question proved to be quite a challenge. The studies were difficult not only due to the fact that all measurements had to be carried out under water. In order to understand in what context dolphins use their sounds to communicate with one another, Prof. Janik had long listened to the sounds made by ‘conversing’ dolphins. Then, having worked out a certain model, he played back the voices, which included different types of whistles, squeaks and squeals, checking if the animals’ behaviour matched his expectations. ‘We developed the hypothesis of signature whistles, used by dolphins to “call out” a specific individual from a larger group. In our studies, we played back the individual signature whistles and checked whether and how particular dolphins responded when hearing their own initials’, says Prof. Janik.

The results of the research confirmed the bold hypothesis that dolphins have... names! How are they given? Right after birth, small dolphins “think up” names for themselves by copying sounds from the environment. It’s also not uncommon for the animal’s mother or – in captivity – a caretaker, to play a vital role in the creation of a name, as their sounds are imitated by baby dolphins. In a murky environment, where visibility is very limited, it’s very difficult for mothers and children to find each other after they are forced to part. As Prof. Janik points out, ‘making very specific voices enables dolphins to break through the chaos of the surrounding sounds and, consequently, locate one another’. Hence, signature whistles are individual, unique names, created for themselves by each dolphin. The researcher’s studies suggest that these names have no other meaning than that of ‘labels’ given to specific animals, and one dolphin can remember the names of up to one hundred companions.

So there comes the question: why do these sea mammals need such an advanced communication system? ‘One of the theories explaining the extraordinary evolution of their communication is based on their complicated social system’, explains Prof. Janik, adding that ‘in fact they must “negotiate” their relations with many friends and enemies’. For example, bottlenose dolphins live in ‘fission-fusion’ societies, whose size and composition change in time. They stick to their companions only for some time, which results in the constant necessity of interacting with strangers. ‘In fact, this is a typical model of the evolution of social behaviour, whose main goal is to optimise the success of individuals’, contends the researcher. So, if finding a “companion” makes it easier to survive in a group, the evolution will lead in that direction.

A voice from the nose

Another question that arises from the studies into dolphin communication is: where exactly does their voice come from? As underwater animals, they obviously don’t use speech. According to Professor Janik, emitting sounds is the responsibility of dorsal bursae – a structure located in the nasal cavity of these mammals. Through vibrations, they produce sounds, which are then transmitted to water via the forehead. As water facilitates acoustic transmission (due to the lower energy loss, when compared to air), it can carry the sound as far as ten kilometers.

There have already been studies proving that dolphins can learn a symbolic language other than their own: react to simple commands, comprehend expressions of quantity, and even recognise names for parts of their own body. Then, if the dolphins’ communication is so advanced, can they be considered to have their own language? If so, is it possible for us, humans to create its dictionary? ‘In our experiment, which involved playing back recorded sounds, we managed to communicate with dolphins, engaging in what can be called a conversation with them’, says Prof. Janik. The researcher has also established that the mammals can express their feelings in such communication. The question whether they can use “words” to influence the emotional state of an interlocutor has been subject of a heated academic debate.

Prof. Janik’s research has brought to light the phenomenon of dolphins’ names and paved the way for further studies in this area. It also opened up new research perspectives in the field of evolution of human language as a system of vocal communication and of human cognitive processes in general. Hence, it’s an important step in the long journey towards understanding the nature of humanity and the fundamental differences between species.

Prof. Janik’s lecture “Marine mammal communication and the nature of language” was organised by the Copernicus Center. The talk is available on YouTube.