Cracow Monsters is a relatively new addition to Netflix’s streaming service, supposedly based on Slavic mythology. But is it really? In the review below, Prof. Andrzej Szyjewski from the JU Institute of Religious Studies offers his opinion on the series’ faithfulness to the source material.

Recently released by Netflix as an eight-episode series, Cracow Monsters was advertised by relatively well-known names, with Kasia Adamik and Olga Chajdas as directors and a screenplay written by Magdalena Lankosz. The series’ greatest asset and distinctive feature was supposed to be the introduction of pagan Slavic beliefs and mythology into a contemporary urban fantasy set in Kraków as a unique location that abounds with various demons, monsters and bloodthirsty gods. Since the horror genre is not known for its credibility and coherence, let us focus mainly on the ‘Slavic’ aspects of the series.

It’s commonly known that there’s very little to be said about pre-Christian Slavic religion (or religions) due to lack of reliable historical sources. Some researchers have concluded that the history of studying Slavic myths is doomed to lead to disappointment, that there is no Slavic mythology, and that Slavic religion was a disjointed amalgam of primitive beliefs. Others have tried to paint a broader picture of the Slavic view of the divine based on looser methodology and broader interpretations.

When asked by writers and poets about the ‘validity’ of their vision of Slavic mythology, I always say that in fiction even the most outlandish ideas are fair game, even if they are a far cry from facts or widely recognised interpretations. I wouldn’t have any objections to the Netflix series were it not for the fact that it purportedly uses Slavic themes as its main selling point. As it stands, viewers might be mistakenly led to believe that the wide array of demonic and divine characters presented in the series has anything to do with pre-Christian Slavic mythology. I’ll allow myself to provide a few corrections.

According to the screenwriter, she was inspired by a philosophical and religious treatise The God Book (Bożyca) written by Bronisław Trentowski, as of yet unpublished in its entirety. Trentowski wrote it in the 1840s and 1850s based on very limited historical sources which presented a level of knowledge and approach typical of Romantic yearnings for a Slavic mythology. Trentowski had his own vision of the Slavic religion, to which he subordinated his hardly professional analyses and comparative studies. The mythological construct he proposed is indeed intriguing and alluring, chiefly due to highly liberal use of neologisms. When fragments of the book were published in the 1860s, they gained some renown, but today they’re merely a curiosity that illustrates the spirit of Romanticism in Poland.

So how do Slavic demons look like in Cracow Monsters? They can be seen in an image hanging on one of the walls of the weird dormitory/apartment hybrid inhabited by the series’ protagonists: proteges of Jan Zawadzki, a professor in forensic pathology. They’re based on Trentowski’s cosmogony, which saw an ‘all-god’ Jessa (‘being’) at the head of the Slavic pantheon. That formless, imageless deity created the world by speaking the ‘primordial word Halu’, leading to the emergence of Triglav (‘three-headed one’) as its manifestation. Triglav is represented in the series as a carved figure with miraculous properties. The divine being tore off his three heads, one by one, and the blood flowing out of them gave birth to white, black and red gods. The white gods were associated with fire, good and beauty, while the black gods were bringers of chaos, unrest and war. The red gods are portrayed in the series as rulers of Earth and guardians of balance; Trentowski, however, saw them as gods of the beyond. It was probably their leader, Ham, who met with the main character while she was travelling to the underworld to meet with her dead mother. 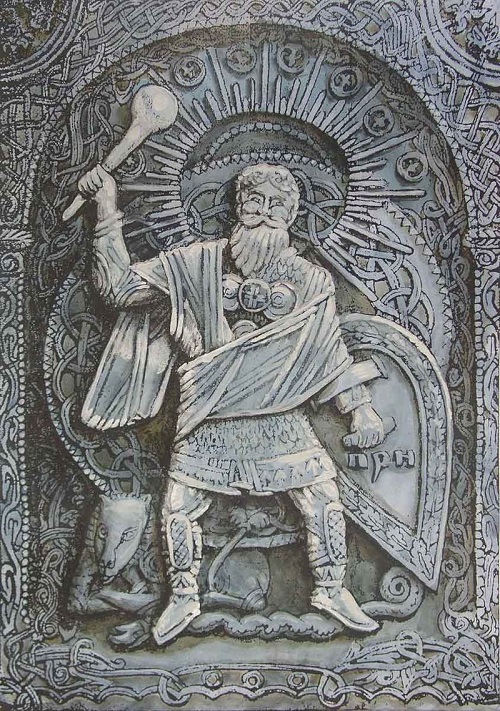 As we learn throughout the series, a curse fell on Kraków in the times of its legendary founder, King Krak, causing the city to be haunted by an entity known as Chworz, which Trentowski thought of as the second most powerful black god, a great cosmic dragon that eclipsed the Sun. We also know him as the famous Wawel Dragon, to whom the Kraków inhabitants were forced to sacrifice children. As the legend goes, people rose up and Krak banished or killed the dragon. In the series, this act is attributed to Wanda, Krak’s daughter.

The plot of Cracow Monsters revolves around the return of Chworz, who for some reason possesses a young boy from a dysfunctional home in order to sow chaos and destruction in Kraków. He is challenged by a group of medical students led by professor Zawadzki, adept at the mysteries of Slavic mythology, by some miraculous turn of events preserved in the old books found in his library. Judging by the illustrations, the books are more likely to be concerned with theurgy and alchemy. Though the inspirations in the visual layer of the series are clearly visible, Guillermo del Toro’s Pan’s Labyrinth being the most obvious, they are far removed from Slavic themes.

Members of the group are chosen by the professor’s assistant Lucjan Szczęsny, also known as Lucky, who seeks people gifted with supernatural abilities. Plot holes prevent the viewers from learning why such people can only be found amongst students of medicine. The group, a cliché more similar to Ghostbusters rather than the Avengers, investigates the activities of Slavic demons from a headquarters masquerading as a gift shop on ul. Grodzka. In theory, they are supervised by the professor, in practice, in most cases he either does nothing, betrays them, or forces them to break the law. One day, the group is joined by the series’ protagonist, Alex. Suffering from childhood trauma and being unable to express any positive feelings, she turns out to be an incarnation of Wanda, a high priestess of the god Veles. It is she who will need to face Chworz in the series’ finale.

In the meantime, the viewers are subjected to a whole series of disgusting and terrifying characters of various origins. It quickly becomes obvious that even Trentowski’s inventive vocabulary and imagination is not sufficient enough to describe the mix of entities gathered under the banner of supposedly Slavic mythology. The screenplay incorporates ideas from other, more contemporary Native Slavic faith believers (Rodnovery) and New Age workshops. For instance, in episode four, Chworz summons a creature called Spas. He is, in essence, a personification of certain holidays, described by Ukrainian Rodnovery volkhv (wisewoman) Halina Lozko, which the series depicts as something similar to Ded Moroz, who in turn can be likened to Santa Claus. Over the course of the series, Spas, carrying a staff decorated with hanging dolls, busies himself with freezing and then hanging people who failed to give him a present. The ‘Slavic Grinch’ meets his end when Alex electrocutes him with a high voltage wire. It therefore seems that the screenwriter didn’t bother to carry out at least a minimum amount of research when it came to the most key aspect of the show. She didn’t know that the name ‘Spas’, coming from the word spasitel, which means ‘saviour’ and denotes Christ, is unsuitable for a pre-Christian demon.

There are many more cases like this one. The protagonists perceive the black gods as bringers of chaos, treating the concept of ‘chaos’ as inherently Slavic. Additionally, the screenwriter simply copied some terminology from New Age websites, introducing ‘Slavic motanki dolls’, but since the whole series is based on Slavic themes, what other dolls could have been used? At the end of the second episode, one of the characters sings a Bulgarian folk song Izgrela mi in exactly the same way as contemporary performers Laboratorium Tańca [Dance laboratory] perform it. In the series’ finale, the protagonists bellow two of the four syllables of the Ra Ma Da Sa mantra when fighting Chworz. When doing so, they perform actions evocative of the Christian concept of possession by the devil (indeed, there’s even a scene earlier where an evil spirit is banished into a pig – straight out of the synoptic gospels).

Even when the screenwriter bases the story around concepts introduced by Trentowski, she seems not to understand them and misrepresent them, either knowingly or unknowingly. The best example of this is using the neologism bożyca, which Trentowski means as ‘knowledge of gods and religion’, to signify a kind of protective spirit, a radiant entity guarding the main protagonist. She also calls it an Aitvara, which indeed denoted a guardian spirit, but one that watched over homesteads, not individuals. Aitvaras were reptilian in shape, brought wealth and prosperity, and were absolutely not exclusive to high priests and priestesses. However, Slavic themes are sometimes twisted for the purpose of making a joke: a certain scene introduces Piwka, a Slavic goddess of intoxication (from Polish piwo, ‘beer’). In Trentowski’s works, Piwkas, known more commonly as Piewkas or Piewalicas, were sweet-voiced demon servants of Belin, god of augury.

The abovementioned examples show that the ‘Slavic’ themes found in the series are a classic example of a postmodern simulacrum, a confused mixture of mismatched ideas taken from 19th century Romantic writings and New Age workshops. Neither the textual nor the visual layer of the series is based on Slavic beliefs, or even attempts at reconstructing the pre-Christian Slavic religion. Its ‘folksy’ trope is yet another cliché: Alex’s grandmother is a harsh, grumbling wisewoman, serving out liqueurs and bigos (traditional Polish hunter’s stew) to ‘strengthen’ the Kraków Ghostbusters and declaring that ‘the country folk never forgot the faith of their ancestors’ while producing a figurine of a Slavic deity from a hiding place. It all aims to create an impression that the villages around Kraków have somehow preserved an unadulterated version of pre-Christian Slavic cults, which flies in the face of all rules of syncretisation developed by religious studies researchers.

One of the series’ strongest points could be its setting: Kraków, a city famous for its rich legendary and historical symbolism. Unfortunately, Kraków also becomes a fantastical amalgamation of real and fictitious places (such as Wanda Mound). Judging from the places visited by the protagonists during their chase after the zapadliska, they can magically jump from one side of the Vistula to the other every few seconds. The viewers will also get the impression that all classes at the Jagiellonian University are conducted solely in Collegium Novum, the administrative centre of the University. Because of this, the eponymous Kraków becomes a simulacrum just as much as the ‘Slavic beliefs’. The most convincing idea related to Kraków in the series is the issue of the curse: the city is unable to develop properly, trapped in a hollow, drowned in smog and ravaged by extreme weather. In the series, Kraków becomes something akin to London, either shrouded in fog or beaten by rain. In this regard, the screenplay rises to the challenge.

In summary, Cracow Monsters is a reflection of neither Kraków nor Slavic themes. It’s weak even when treated simply as a horror flick, relying on revulsion rather than dread to convey its message. But it’s worst aspect is the screenplay, particularly the dialogues, recited by paper-thin characters that serve as a backdrop for the main protagonist. It is my hope that the series will be discontinued.