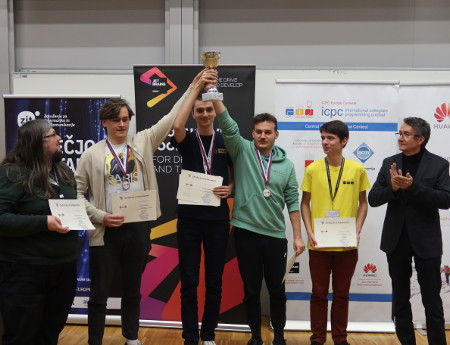 A team of analytical computer studies from the JU Faculty of Mathematics and Computer Science, featuring Antoni Długosz, Grzegorz Gawryał and Jacek Salata, has won in the ICPC Central European Regional Contest, which took place on 26–27 November 2022 in Ljubljana (Slovenia).

The JU team managed to solve 10 out of 12 problems, beating the teams from the University of Warsaw, Charles University in Prague and the University of Zagreb. By winning the regional contest, the Jagiellonian University team has earned a place in the world championship (International Collegiate Programming Competition, ICPC), which will take place in autumn 2023 in Egypt.

Other teams from the Jagiellonian University also performed commendably:

JU teams are training under the supervision of Dr Lech Duraj.