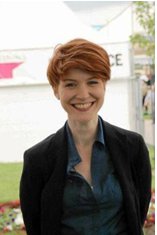 The doctoral student of the Jagiellonian University Monika Koperska, the winner of the Polish edition of FameLab Competition was chosen the top new science communicator in the world by FameLab competition audience at the competition finals in Cheltenham, UK.  Besides the audience vote prize, she has also been awarded one of two runner up prizes from the panel of judges.

Across 19 countries, thousands of engaging scientists, engineers and mathematicians have been competing to make it to the FameLab International Grand Final hosted by Quentin Cooper, presenter of BBC Radio 4's Material World. The 19 finalists took to the stage in two semi finals and the grand final to convey the wonder and relevance of a chosen scientific specialism in just three minutes.

In her presentation Monika Koperska explained why paper might be the best way to store information, despite the claims about the "death of paper" in the digital age.

Her presentation can be watched HERE.

FameLab aims to discover charismatic, up-and-coming scientists who can inspire people to see the world from a new perspective. The competition is the brainchild of The Times Cheltenham Science Festival. Since its birth at Cheltenham Science Festival in 2004, FameLab® has grown into arguably the world's leading science communication competition. A partnership with the British Council since 2007 has seen the competition go global and this year's International Final featured the winners from Austria, Bulgaria, Croatia, Cyprus, Czech Republic, Egypt, Germany, Greece, Hong Kong, Israel, Italy, Lithuania, Poland, Portugal, Romania, Serbia, Switzerland, UK and USA.