Why aren’t there any vast oil and gas deposits in Poland? 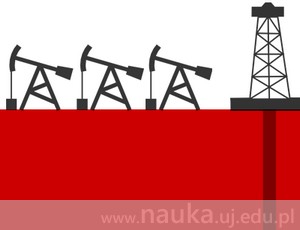 What phenomena lead to formation of fuel deposits and why can't the ones in Poland compare to those in the Middle East? We asked Dr hab. Patrycja Wójcik-Tabol from the Institute of Geological Sciences to explain this issue to us.

1Question is a series of articles by the University Marketing science communication unit, in which specialists and experts from various fields briefly discuss interesting issues related to the world, civilisation, culture, biology, history, and many more.

Before we conclude who’s ‘guilty’ of this petroleum partiality, we have to establish and chronologically order the facts pertaining to the genesis and distribution of oil and gas – fossil fuels that are a mix of natural hydrocarbons.

According to the widely accepted theory of origin of oil and gas, they are deposits of ancient, fossilised organic material converted by geochemical processes. First and foremost, a certain amount of living organic matter – mostly phytoplankton, i.e. microscopic plants and cyanobacteria – needs to accumulate in one place. When these organisms die, they descend to the bottom of the water area along with the remains of terrestrial plants, thereby forming bottom deposits.

The less oxygen and bacteria activity is present in the environment, the more concentrated the organic matter becomes. As it’s buried deeper and deeper beneath newer sediments, it becomes more and more transformed by the temperature and pressure. The product of biochemical and geochemical transformation of organic matter is called kerogen. At the depth of about 2,000 metres, where temperature exceeds 60°C, begins the process of thermal degradation of kerogen (‘catagenesis’). The chemical bonds between carbon particles dissolve, creating the main ingredients of oil. Further dissolution of carbon chains results in creation of volatile hydrocarbons – gas.

Through a system of microscopic cracks, the hydrocarbons move upwards, where pressure becomes progressively lower. They continue their journey until they manage to get to the surface or – more frequently – they hit a layer of impervious rock, unable to move any further. They become trapped, resulting in bulging rock formations called anticlines, which most frequently contain conventional deposits of fossil fuels.

The environmental conditions prevailing on Earth millions of years ago facilitated accumulation of organic matter. In the following millennia, geological events happening in a strict sequence led to generation of hydrocarbons, which were then trapped and transformed into fossil fuel deposits.

Why isn’t Poland a petroleum power?

As of 2015, there are 86 documented oil and gas deposits in Poland. They are located in the Carpathians, Polish lowlands, and the Polish exclusive economic zone (EEZ) within the Baltic Sea. These deposits, however, are rather small, as they’re estimated at about 150,000 tonnes of oil and 230 million cubic metres of gas. By comparison, the deposits located in the Middle East are estimated at tens of millions of tonnes of oil and billions of cubic metres of gas.

This vast reservoir of fossil fuels could have only developed in tectonically stable conditions. For a long time, the Persian Gulf was an area where sedimentation occurred without major disturbances. The Earth's surface in this area underwent the process of subsidence, i.e. a downward shift. The layers of black shale were buried beneath newer sediments, allowing for catagenesis, which in turn caused hydrocarbons to accumulate in porous carbonate rocks. It happened between 420 and 250 million years ago, during the formation of the supercontinent Pangea.

The geological history of Polish lands was in particular shaped by episodes of continental collisions and orogenies (Caledonian, Hercynian, and Alpine). When lands clashed, seas ‘disappeared’, and the rock formations located at their bottoms became deformed, uplifted, and eroded. Black shale wasn’t as common here as in the Persian Gulf basin. Subsidence was limited both spatially and temporally, thereby making it less effective in generating hydrocarbons.

The ‘culprit’ behind Poland’s lack of oil and gas is therefore the fact that some geological areas provided better conditions for the development of certain resource deposits than others. In the case of Middle East, these turned out to be oil and gas, while the same is true for coal and copper in Poland.