Tissue engineering - great hope for medicine. Part I: From prostheses to transplants 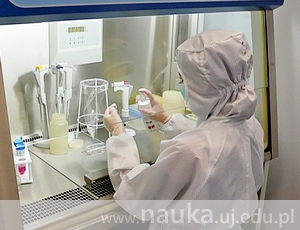 The opening ceremony of the academic year 2017/2018 at the Jagiellonian University included a special lecture by Dr hab. Justyna Drukała from the JU Faculty of Biochemistry, Biophysics, and Biotechnology, a biologist, head of the JU Cell Bank.

Here is the English translation of the first part of the lecture, which takes the reader on a fascinating journey into the world of transplantation and regenerative medicine.

Part I: From prostheses to transplants

Organ regeneration is a phenomenon especially important for long living organisms. The organ’s failure to perform its functions due to an injury or illness can lead to the organism’s death. Hence, the need to restore the functionality of damaged organs and tissues has always been one of the vital medical challenges. Throughout the ages there were various attempts to solve this problem.

The first efforts to address this issue involved the use of mechanical prostheses, which dates back to ancient times. Due to their beliefs concerning afterlife, the ancient Egyptians found it very important to preserve the integrity of body after death. For this reason, they used implants to replace missing body parts. The archaeological research revealed that golden tooth implants were used as early as 2,500 B.C. The Egyptian Gallery of the British Museum in London includes an intricately made artificial toe from circa 600 B.C. Archaeologists are unsure whether these implants were also used during lifetime, which would indicate a very early application of an intricate solution laying foundations for modern prosthetics.

To a certain degree, using various materials makes it possible to reconstruct the structure, shape, and even some of the functions of a missing body part. Prostheses perform mechanical functions, but aren’t integrated with the body, just more or less permanently attached to it. Full regeneration and optimal reconstruction of all functions of an organ wouldn’t be possible without a living tissue containing cells, the elementary units of life, which really determine the tissue’s reconstruction and integration with the body.

One of the first attempts to transplant a living tissue was linked to Saints Cosmas and Damian, who lived in the 3rd century A.D. and are considered patron saints of organ transplantation. Stories of their miraculous healings include a legend about a transplant of a leg, which is reflected in the worship and depictions of these saints.

Although the ancient Indian physician Sushruta, one of the earliest known surgeons, used skin from the forehead to reconstruct nose as early as 600 B.C., it wasn’t until the late 16th century that the foundations of plastic surgery were laid by Gaspare Tagliacozzi from Bologna, Italy, who devised and described a method of reconstructing nose with a flap of upper arm skin.

Yet, a dynamic development of organ transplantation dates back to the early 19th century. The first successful transplants were grafts of a patient’s own skin (autografts), performed by the German surgeon Carl Bunger in 1823. 46 years later Jacques Reverdin from Switzerland grafted small islets of skin onto a hard healing wound and, soon afterwards, the German physician Carl Thiersch used larger pieces of skin to treat burns.

The second half of the 20th century was marked by another milestones in the history of transplantation medicine – the development of effective anesthesia and, most of all, the use of immunosuppression, which enabled organ transplantation from unrelated donors. Spectacular successes in organ transplantation were made in the 1960s. The fist successful heart transplant was performed in 1967, which was soon followed by the pioneering transplant of liver.

Currently, it’s possible to transplant multiple organs at the same time, and to perform limb and face transplants. Besides, the newly developed techniques of storage of tissues and organs allowed creation of tissue banks with immediately accessible transplant material.