Biological rhythms have an enormous impact on the biochemistry, cell biology, physiology and behaviour of all living organisms. These mechanisms are particularly conspicuous in birds. Unfortunately, the rising human pressure, especially the light pollution, largely distorts the environmental cues regulating the animals’ internal biological clocks. Dr Joanna Sudyka from the JU Institute of Environmental Sciences has been studying the consequences of this phenomenon.

Our knowledge about the impact of light pollution on the natural environment is growing year by year. What is most important in this context, is the understanding of the mechanism of causal relationship between the presence of artificial light and the observed changes. This requires conducting relevant experimental studies. So far, there has been too little experimental research on this issue, mostly carried out in laboratory conditions, which largely differ from those found in the environment where wild animals actually live. Besides, these  studies have also frequently focused on nocturnal animal species (such as mice and rats), which makes their results hard to interpret in the context of biology of diurnal species, such as humans. 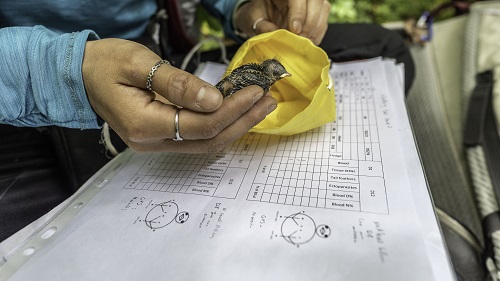 While many of us are largely able to control the amount of exposition artificial light we are subjected to, there are some people, for instance night-shift workers who are less fortunate in this regard. Similarly, wild animals often find it difficult or even impossible to avoid light pollution, and the problem is not limited to urban-dwelling species.  For instance, female sea turtles lay eggs on beaches, and their children right after hatching move to the brightest point, which should be moon or stars, instead of a lamppost or a seaside village. What’s more, light also confuses the females, which often die run over by cars. Sea turtles are the best known but by no means the only case of the destructive impact of artificial light. Light ‘traps’ kill thousands of insects, but also many larger nocturnal animals: amphibians, mammals (e.g. bats), as well as some reptiles. Light pollution also harms some of mostly diurnal animals, like birds, which may gather around sources of light or crash into them while flying. All this leads to serious changes in the density and species composition of the fauna, and may pose a threat to biodiversity.

Besides the danger of instant death, artificial night light also leads to the disturbance of circadian rhythms, better known as internal biological clocks. As the name itself suggests, these mechanisms should run like clockwork, as they regulate practically all aspects of the functioning of living organisms, including biochemistry, cell chemistry, physiology, and behaviour. That is why disturbing their work can lead to very serious health consequences, for instance, to an increased incidence of some cancers in humans, and, consequently, to premature deaths. More and more problems generated by night pollution are being discovered: from sleep and metabolic disorders to immunodeficiency or reduced body weight (which, in the case of animals, is often linked to lower survivability). Even worse, it is suspected that many negative consequences of circadian rhythm disturbances still remain unknown. 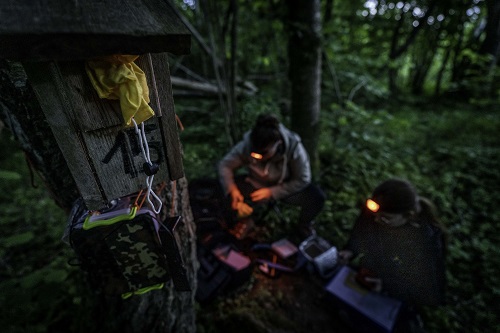 More field research is needed to learn more about this issue. This is why researchers from the Jagiellonian University Institute of Environmental Sciences are conducting an experiment consisting of introducing artificial light to nest boxes during the breeding season of collared flycatcher (Ficedula albicollis). These small migratory birds breeding in Poland, among other places, are a perfect species for such a study as they are regularly exposed to light pollution during their annual migrations. The false environmental cues provided by artificial light distort their natural compass by interfering with the light of moon and stars, which the birds often use for navigation.

How do the researchers study this problem? Firstly, they measure how artificial night light disturbs the birds’ circadian rhythms, including gene expression, that is, to put it simply, the way in which the information present in genes is decoded and translated into functional products, such as RNA or proteins. Secondly, they measure the levels of relevant hormones  (melatonin – the hormone of sleep, ghrelin – the hormone of hunger and corticosterone – the hormone of stress). All these parameters regulate each other and have a huge impact not only on the birds’ physiology and behaviour, but consequently also on their breeding success and survivability. Hence, in order to assess their changes during the circadian cycle samples need to be collected during night and day, which is challenging from a logistic point of view, as the nest boxes must be found during a night-time forest trip (on the other hand, this can be quite an adventure). During such a visit, birds need to be measured and weighed, the researchers have to take their blood samples and install video cameras in order to monitor their behaviour in response to artificial light. All this must be done in the shortest possible time, to disturb the animals as little as possible. Besides, infrared torches are used, as the light from standard ones could disrupt the experiment. After the successful operation the nestlings come back to their boxes, where they stay until their first flight and the scientists – to their labs, where they seek answers to the research questions based on the gathered data.