While the world is holding its breath in wait for the effects of the rapidly developed COVID-19 vaccines, news of a surprising development in malaria vaccine research has electrified the scientific community. Why is information regarding a vaccine for a long-known disease so exciting? We asked Dr Dominika Salamon from the JU MC Department of Medical Molecular Microbiology.

One of the reasons for the interest in the newly developed malaria vaccine is that the disease is notorious for its deadliness. Malaria is still considered to be the most dangerous killer amongst parasitic diseases, with 67% percent of its victims consisting of children that are less than five years old, according to World Health Organization report from 2019. The parasite responsible for malaria, Plasmodium malariae, is still able to effectively evade our immune system defences, preventing us from developing lasting immunity. 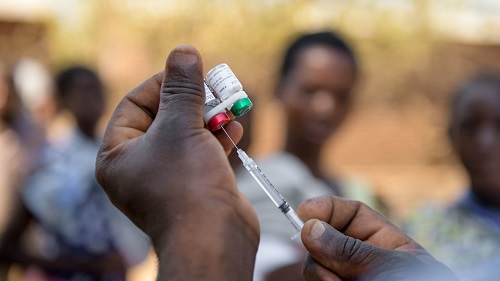 Despite the fact that malaria was first described on the papyri of Ancient Egypt and that the pathogens causing it were discovered in the late 19th century, the single cell organism belonging to the genus Plasmodium continues its reign of terror to this day, mostly in Sub-Saharan Africa, but also in tropical regions such as South America and Southeast Asia. We’re the most afraid of one species of the parasite, Plasmodium falciparum, since its symptoms manifest as quickly as 7 days after infection, rapidly progressing to serious conditions, including death due to brain damage. It is precisely this species that is the target of the new vaccine, described recently in the latest issue of Lancet by a group of scientists from the University of Oxford.* In their paper, they show the results of the second stage of the clinical trial of the new vaccine, tested on a group of 450 children in Burkina Faso, which point to 77% effectiveness.

The history of research on this type of vaccine dates back to the time when Plasmodium malariae was first identified. Although there are drugs that can effectively combat the disease (for instance, quinine and artemisinin-based substances), the fact that they need to be administered as soon as possible, in the first stage of the disease, and that all species of the Plasmodium parasite are developing more and more efficient drug resistance mechanisms means we need to find something far more reliable. For many decades, researchers have tried to develop a vaccine for malaria; however, the task proved to be extremely difficult: not only is the parasite’s lifecycle complex, but it’s also able to hide itself from the immune system.

Malaria infection in humans begins with a bite of a mosquito from the species Anopheles, the intestines of which contain the infective form of the parasite. The parasite enters the human organism through the mosquito’s salivary glands during feeding and ‘hides’ inside of its cells: first in the liver, then the red blood cells. There, it undergoes several additional stages of development, eventually multiplying, destroying the host cell and moving on to others. what’s more, Plasmodium malariae has an external protein-lipid ‘shell’ with constantly changing composition, which serves as a form of camouflage, preventing the immune system from detecting and responding to the threat.

The RTS,S/AS01 vaccine, which began its pilot scheme in several African countries in 2019 and is currently being used on children, has not met the expectations, as it requires as many as four inoculations and still has only 40% efficacy. The purpose of this vaccine is to induce the organism to create antibodies that would combat circumsporozoite proteins (CSP) found on the surface of the sporozoite, i.e. the infective form of the parasite.

Meanwhile, the new vaccine, R21/MM, contains the same protein, but its effects have been ‘reinforced’, which led to 77% efficacy. Scientists used biotechnological manipulation, combining  the DNA of HBs antigen protein of the Hepatitis B virus and a fragment of Plasmodium’s CSP. Introduced into Hansenula polymorpha yeast, this particle results in the creation of a particular antigen protein which is then combined with an extract from the soapbark tree. According to the vaccine’s inventors, this blend will be safe and effective in stimulating the immune system, reducing the number of required inoculations.

If these goals can be achieved during the third stage of clinical trials (on a group of several thousand volunteers), then we would witness the development of the first anti-parasitic vaccine in the human history with high efficacy that could be used on a large scale. Such an achievement would surely be worth the Nobel Prize.

*SSRN/Preprints with The Lancet publication: Datoo, Mehreen S. and Magloire Natama, Hamtandi and Somé, Athanase and Traoré, Ousmane and Rouamba, Toussaint and Bellamy, Duncan and Yameogo, Prisca and Valia, Daniel and Tegneri, Moubarak and Ouedraogo, Florence and Soma, Rachidatou and Sawadogo, Seydou and Sorgho, Faizatou and Derra, Karim and Rouamba, Eli and Orindi, Benedict and Ramos-Lopez, Fernando and Flaxman, Amy and Cappuccini, Federica and Kailath, Reshma and Elias, Sean C. and Mukhopadhyay, Ekta and Noe, Andres and Cairns, Matthew and Lawrie, Alison and Roberts, Rachel and Valéa, Innocent and Sorgho, Hermann and Williams, Nicola and Glenn, Gregory and Fries, Louis and Reimer, Jenny and Ewer, Katie J. and Shaligram, Umesh and Hill, Adrian V. S. and Tinto, Halidou, High Efficacy of a Low Dose Candidate Malaria Vaccine, R21 in 1 Adjuvant Matrix-M™, with Seasonal Administration to Children in Burkina Faso (April 20, 2021). Available at SSRN.