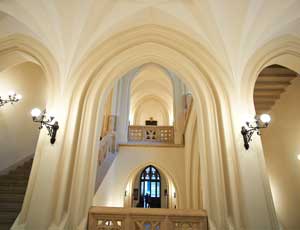 Today, the Jagiellonian University comprises 16 Faculties, where nearly 4 thousand academic staff conduct research and provide education to almost 40 thousand students, within the framework of more than 150 different fields of study. Eminent researchers and state-of-the-art infrastructure make the JU one of the leading Polish scientific institutions, collaborating with major academic centres from all over the world. The Jagiellonian University is also home to numerous student research societies, where young researchers pursue their academic interests and develop friendships with people who share their passion.

The university's prestige in both Poland and abroad is illustrated by its widely recognised research achievements. The scientists and physicians from the JU Medical College carry out pioneer studies, e.g. in cardiac surgery, urology and neurology, often leading to the development of novel treatment methods. Their findings have been published in some of the most prestigious international journals, for instance European Journal of Cardio-Thoracic Medicine, New England Journal of Medicine, and Lancet. JU archaeologists explore the secrets of ancient sites in various parts of the world, including Egypt, Cyprus, Central America, South Asia and Altay. The astronomers take part in the most important international projects in their field, including H.E.S.S. and VIPERS, whereas the results of research by JU biotechnologists have been published in such reputable specialist journals as Bioorganic and Medicinal Chemistry, Molecular Ecology Resources or European Journal of Human Genetics. These are only some examples of remarkable successes for which the Jagiellonian University has been famous in recent years.

The most unique large-scale projects run by the Jagiellonian University include the Jagiellonian Centre for Experimental Therapeutics, Małopolska Centre of Biotechnology, OMICRON, and National Synchrotron Radiation Centre SOLARIS.

Number of programmes of study and specialisations