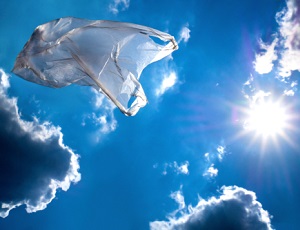 In late September, local media reported that microplastics particles have been discovered in the air in Kraków. The unsettling information came from a research project conducted by the Pedagogical University of Cracow Institute of Geological Sciences and Jagiellonian University Institute of Geography. How alarmed should we be and is there anything we can do about this phenomenon?

The production of plastics began over 100 years ago. At first, people were really enthusiastic about it: they were both extremely cheap and versatile, offering a simple alternative to many different materials used in various branches of industry. Systematic increase of production and continued refinement have made plastic a material we can hardly imagine our lives without. And there would be nothing wrong with that if it wasn’t for a single albeit very serious problem: 60% of plastics produced after 1950 were dumped into the environment as waste. Waste that does not decay.

Obligatory quote from The Graduate

It’s not easy give up using plastics in everyday life, even if one is willing to do so. Just imagine a more or less ordinary day: you get up from your bed and go to the bathroom, take a plastic toothbrush and squeeze out some toothpaste from a plastic tube to take care of your teeth. After you put on some clothes, which most probably contain synthetic fibres, you’re ready for work, but before you pick up your artificial leather bag, throw on your polyester jacket and leave, you make a quick stop at the bathroom again to turn on the plastic-encased washing machine, into which you poured a generous amount of microplastics-filled washing powder. You quickly take the last sip of coffee brewed in a pot with a plastic handle and leave your flat. On the way to the bus stop, you buy yourself a quick snack: a yoghurt in a plastic cup. You hop onto the bus, looking for a plastic seat to sit on or at least a plastic grab handle. The bus sets off, its rubber tyres grinding the asphalt and releasing microscopic particles of plastic in the process. While you travel to your destination, you decide to kill some time and put on earphones connected to you smartphone, both made out of several plastic components. You look out the window and see a group of construction workers in plastic helmets repainting the elevation of a building with polyester-based paint. You finally arrive at your office, sit on a plastic chair and use a plastic mouse and keyboard to log into your computer. Just before you start working, you have a brief look at the news and are distressed to find that you and other people in your city might be inadvertently inhaling plastic particles. And now the question is: is it really that surprising?

As illustrated, perhaps excessively so, in the previous paragraph, it seems utterly impossible to get rid of all the plastics we use. The thing is, once plastic waste finds its way into our environment, it can’t really be removed. In fact, synthetic materials have become a significant stratal component of currently forming geological layers, prompting scientists to call them ‘technofossils’. As far as recycling is concerned, the overwhelming majority of plastics (91%) have not been repurposed – a worrying statistic, to say the least.

The phenomenon of plastics particles accumulating in water, air and sediments is still poorly understood at best. One thing that’s been proven is that when exposed to sunlight, they emit greenhouse gases. To date, however, there have been no estimates as to the scale of this issue. Microplastics have been found numerous times in the marine environment, including fish, seafood, and sea salt. They’re also present in our drinking water, both in taps and bottles, and in beer. Moreover, we can also inhale them. A study performed in Paris has shown that every year the City of Light is showered with 3 to 10 tonnes (!) of plastic particles. It is therefore no surprise that it can get inside our bodies.

This year, in late September, a group of scientists from two Kraków higher education institutions – the Pedagogical University (Prof. Wanda Wilczyńska-Michalik) and the Jagiellonian University (Kinga Jarosz and Prof. Marek Michalik) – have published the results of their research on microplastics particles (i.e. particles no larger than 5 millimetres in diameter) in the city’s atmosphere. They based their study on observations made during the three earliest months of 2019. A preliminary analysis has proven that a large percentage of fibres in the atmospheric dust were of synthetic origin. Currently, the research team is working on providing more accurate data.

What are the consequences of finding plastics in the air we breathe and the water we drink? Sadly, it’s still too early to unambiguously answer that question. We still don’t have enough information to fully assess the detrimental effects it may have on our health. What’s even more disturbing is that the smallest and potentially most dangerous particles, nanoplastics, are so tiny they can’t be detected by most instruments, virtually preventing us from learning more about them, more specifically, their amount in the atmosphere. The only clue to follow are medical examinations performed on employees working in plastics factories. They suggest that prolonged exposure to microplastics can lead to the accumulation of dangerous levels of foreign substances in the organism. As a durable material, plastic is, in essence, irremovable from our body once it gets there. For now, its impact on the immune or respiratory system can only be speculated about. However, these first research projects clearly show that the issue of ‘plastic air’ might affect a great number of people.

The research project ‘Microplastics in contemporary human settlements as a potential indicator of Anthropocene – a quantitative and qualitative analysis’ is currently conducted at the JU Institute of Geological Sciences by Diamond Grant recipient Kinga Jarosz and Prof. Marek Michalik.